Pacquiao, Roach at loggerheads over reunion 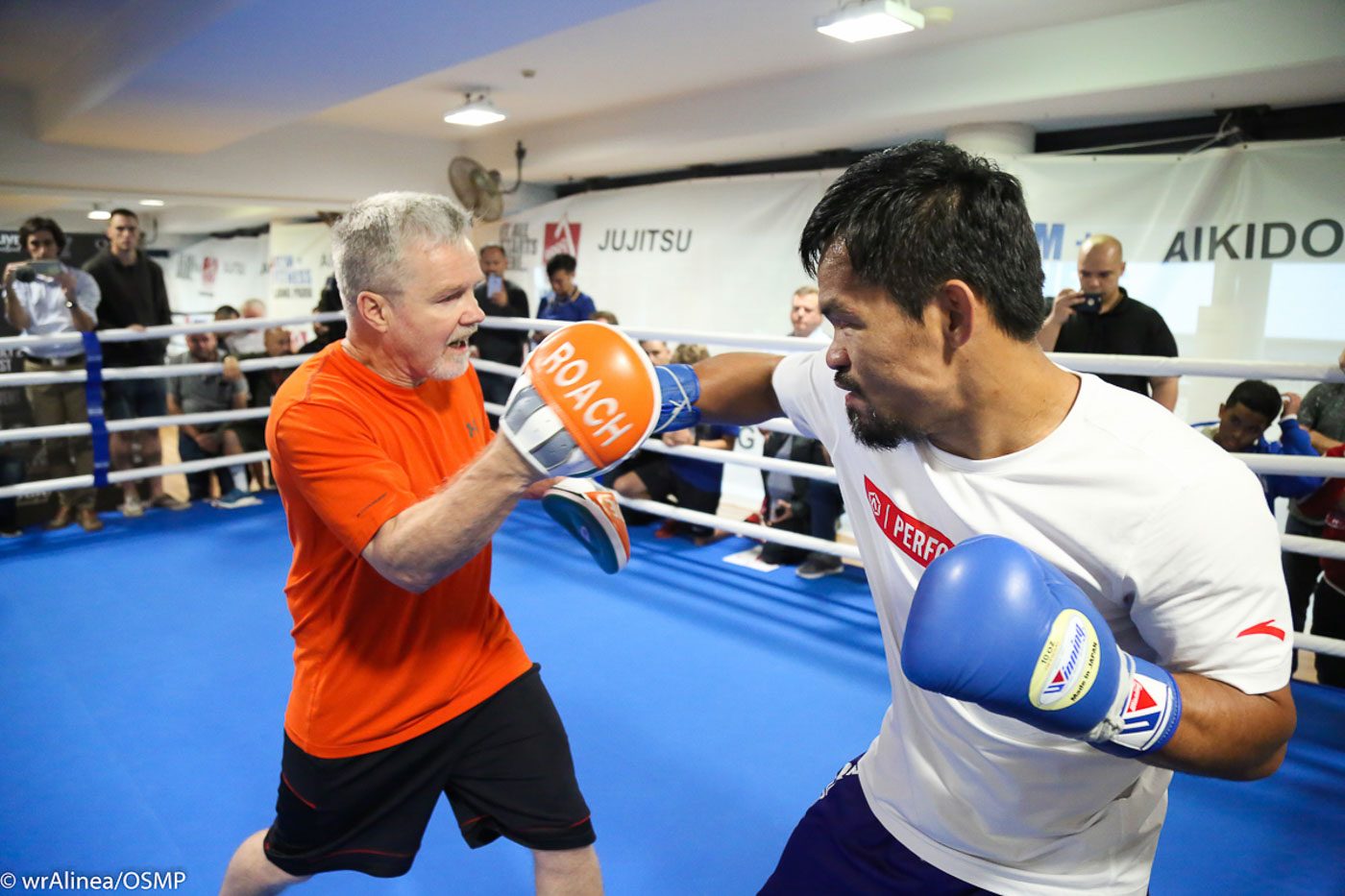 Facebook Twitter Copy URL
Copied
'I'm not going to make a move until Manny calls me. If he can't call me, there will be no deal,' says Freddie Roach

LOS ANGELES, USA – Filipino boxing legend Manny Pacquiao said Tuesday, November 20 (Wednesday, November 21, Manila time) he hopes to be reunited with long-time trainer Freddie Roach for his January bout against Adrien Broner but admitted he had not spoken to the veteran cornerman about renewing their partnership.

Pacquiao ended a 16-year association with Roach ahead of his victory over Lucas Matthyse in Kuala Lumpur in July, breaking up one of boxing’s most famous double-acts.

However the 39-year-old raised eyebrows during a press conference in New York on Monday when he said Roach would be back in his corner for his January 19 fight against Broner in Las Vegas.

Roach though expressed bemusement about Pacquiao’s announcement in remarks to Sports Illustrated, saying he had not been in contact with his former protege.

According to Pacquiao, Roach was kept out of the Matthysse fight primarily because of health concerns as the 58-year-old former boxer is battling Parkinson’s disease. He had elevated his bosom buddy, Buboy Fernandez, to head trainer.

Pacquiao believes Fernandez,  will continue to work well with Roach, who owns the Wild Card Gym in Hollywood, where Team Pacquiao will hold the final phase of training starting before Christmas.

“Buboy and Freddie, they’re a team,” Pacquiao told fighthype.com.“Buboy is always there. He has experienced many fights with Freddie. So I think Freddie can instruct Buboy to do something like that. Because, you know, Freddie’s not young anymore and I’m, you know, I feel pitiful [for] Freddie. I’m praying for him, for the healing of his sickness. My plan, my thinking is he can use Buboy to do mitts in training, supervise and watch the training, like that.

“[Roach] can rest and just watch the training, and instruct the training, strategy-wise, advise some techniques like that. Because Buboy, he knows what Freddie wants.”

Pacquiao and Roach, of course, have worked together since Pacquiao first set foot in the United States in 2001.

“I still have never directly spoken to Manny (since 2017),” Roach said.

“I’m not going to make a move until Manny calls me. I’ve been like a father to Manny for 15 years. If he can’t call me, there will be no deal.”

When asked to clarify the situation by AFP on Tuesday, Pacquiao said he hoped Roach would work as a “supervisor,” with Fernandez taking a lead role in training.

“I don’t have any problem with Freddie Roach,” Pacquiao said at a media roundtable. “All I say is that I think the other work in training should be assigned or designated to Buboy.

“Freddie can supervise or instruct Buboy, this is what we’re going to do.”

When pressed on whether he had spoken to Roach however, Pacquiao admitted that there had been no contact.

“We have scheduled to talk today,” he said. “My idea is to let Buboy handle the mitts, and (Freddie) should just supervise and correct the training situation, or techniques, or anything like that.”

Pacquiao said he plans to divide his training camp into two parts, with the first half taking place in the Philippines and the final part in the United States. (READ: Pacquiao to train full blast vs Broner in U.S.)

He said Roach would play no part in the Philippine leg of his training camp. “He can just wait here,” he said. “I’ll be here next month in December.”

If Pacquiao and Roach are reunited, it will come after a striking and pronounced divorce.

Despite the father-son like bond they had shared for over a decade, Pacquiao said he could not remember the last time he spoke to Roach, blaming demands of his role as a Senator in the Philippines for the rupture.

“It’s been a long time ago,” Pacquiao said. “A long time ago that I didn’t speak to Freddie. I was busy in the Philippines.

“I don’t even have time to come to United States for a vacation for relaxation. It’s really busy being a Senator.”

Pacquiao, who turns 40 next month, has not fought in the United States for two years.

His last bout in Las Vegas in 2016 was a convincing victory over Timothy Bradley that had been billed as his retirement fight.

Pacquiao however told AFP that “loneliness” had prompted him to return to the ring.

“When I stopped boxing I just realized after watching some fights, I feel so lonely,” Pacquiao said.

“Despite my work in the Senate as a public servant, I really miss boxing. I feel lonely. Boxing is my passion, I grew up in boxing.”

Pacquiao, 60-7 with two drawn and 39 knockouts in a career that began in 1995, said he still hopes to negotiate a rematch of his 2015 superfight with Floyd Mayweather. (READ: Pacquiao teases Mayweather rematch after January bout)

Mayweather, who won a fight widely regarded as a letdown, has frequently teased the possibility from his retirement.

Pacquiao said any move for a rematch would have to come from Mayweather.

“We met in Japan. I said ‘I’m the champion, I have the belt. It’s up to you if you want to come out of retirement and challenge me.’ I’m ready any time.” – Rappler.com