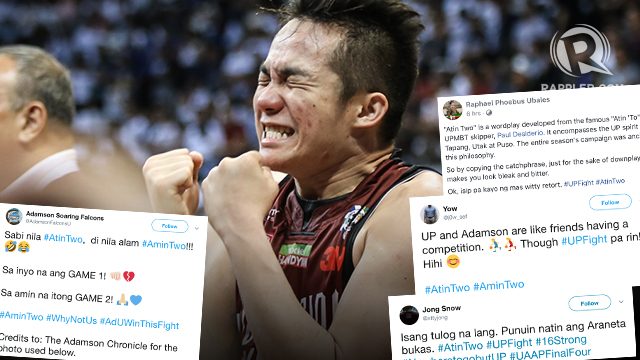 MANILA, Philippines – From canceled classes to sold-out tickets, the Adamson University and University of the Philippines communities have taken the do-or-die semis game hype to the next level.

Fans from each team even coined hashtags #AtinTwo and #AminTwo and have been tweeting them out of excitement for the game on Wednesday, November 28, 3:30 pm, at the Araneta Coliseum.

The Maroons fired the first salvo, playing around UP captain Paul Desiderio’s battle cry “Atin ‘To”.

Adamson fans fired back with their own poster of “UP killer” Sean Manganti to go with their hashtag #AminTwo to let their fierce opponents know that the Falcons are looking to clinch the UAAP Finals berth in Game 2 of the semis.

Check out what the other fans think about this hashtag war:

UP vs ADU hashtag wars – Curated tweets by RapplerSports