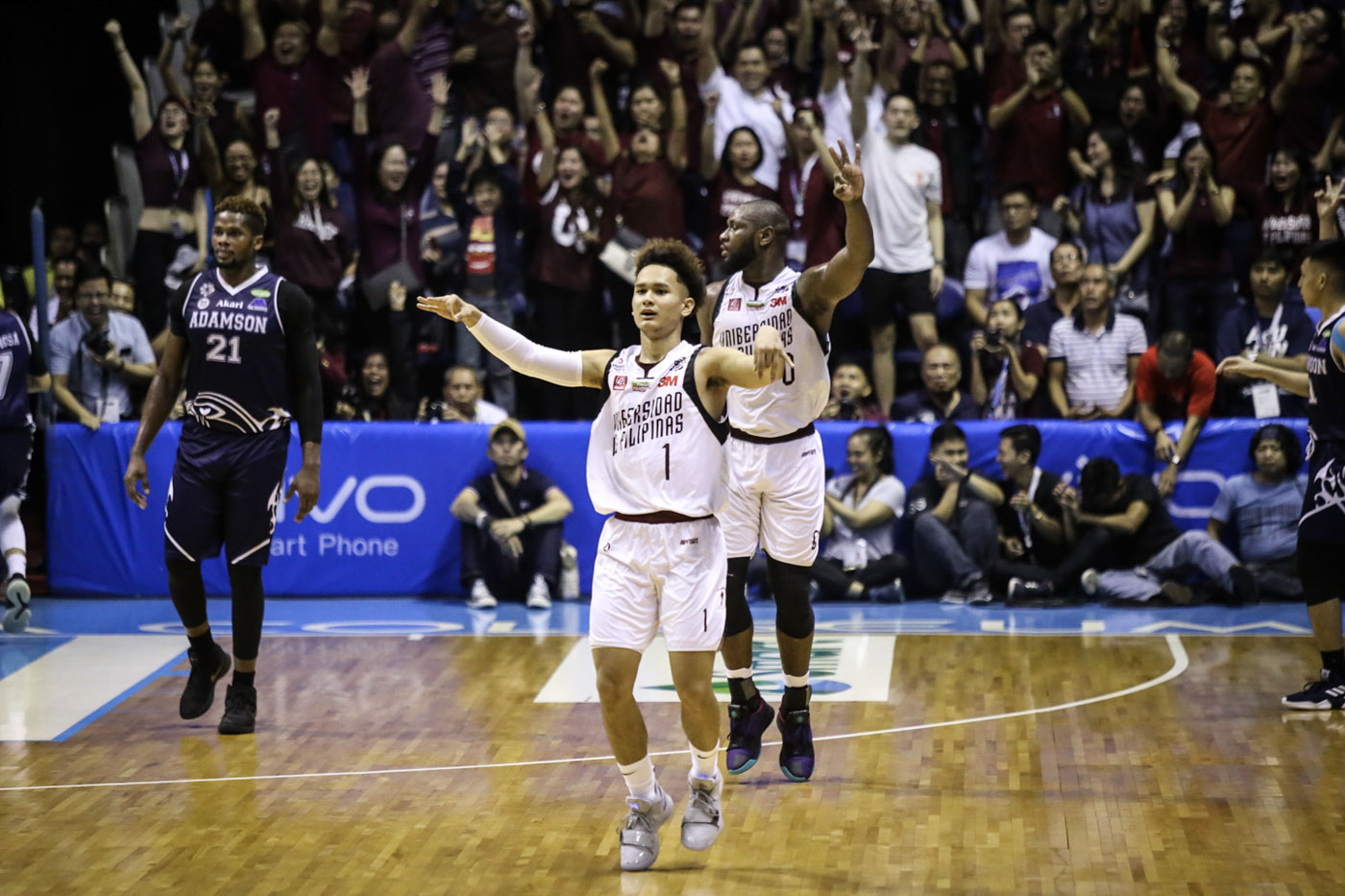 University of the Philippines – whose Fighting Maroons had been the league’s long-time laughingstock – just crashed into the UAAP Finals for the first time in 32 years.

Paul Desiderio knocked in the game-winner with 6.6 seconds left as the Fighting Maroons outlasted the Adamson Falcons in an overtime thriller, 89-87, in the do-or-die Final Four showdown of the Season 81 men’s basketball tournament at the Araneta Coliseum on Wednesday, November 28.

The game looked headed for another extra period after Jerom Lastimosa, who also forged overtime, responded with a pair of tying free throws, 87-87.

But Desiderio got him right back with a cold-blooded mid-range jumper, 89-87, with 6.6 seconds left.

Juan Gomez de Liaño erupted for a career-high 30 points on a 12-of-22 (55%) shooting and grabbed 6 rebounds to power the Maroons, who last advanced to the Finals during their title romp in 1986.

Desiderio – who blurted “Atin ‘to” in a previous team huddle that eventually became the team’s battlecry – cemented his legendary status with another clutch performance to finish with 16 points and 11 rebounds on top of 4 assists, 2 steals and a block.

Jerrick Ahanmisi paced the Falcons with 20 points and 3 boards, while Lastimosa chipped in 17 markers, 7 boards and 5 assists in a heroic stand against UP.

The Maroons, who forced the winner-take-all with a similarly nail-biting 73-71 escape in Game 1,  incredibly overcame the twice-to-beat advantage of the No. 2 Falcons.

“This is the bridge that we need to cross in order for us to be considered as a team that’s going to help the program of UP.  We have to cross the bridge into greatness, and that’s what they responded to do.”

Lastimosa kept the Falcons in the fight after knocking in a game-tying triple that forced the extra period, 78-78.

Desiderio had a shot for a game-winner, but it clanked off as time expired in regulation.

Momentum seemed to have shifted to Adamson’s side  after a Simon Camacho layup was followed by a split Manganti free throw and a wide Lastimosa three that gave the Falcons a six-point lead, 84-78, in the early stretch of overtime.

But with two minutes left, the Maroons responded with a Diego Dario mid-range as Gomez de Liaño also sank a tough layup to inch within two, 82-84.

Bright Akhuetie then broke out of his dry spell and sank the tying putback, 84-all, with a minute to go.

Desiderio got wide-open for the clutch go-ahead three, 87-85, with less than 40 seconds to go, but Lastimosa again tied the game at 87 with a couple of free throws before the UP captain capped it with another one of his heroics.

The Maroons got out on an early 51-42 lead at the half off the hot shooting of Gomez de Liaño. In just two quarters, the super sophomore already drained 20 points off the bench on a 3-of-5 (60%) three-pointers.

The Maroons seemingly had the game in full control and erected a 16-point spread, 60-44. But the resilient Falcons unleashed a 23-4 run to wrest the advantage, 67-64

Behind Gomez de Liaño, the Maroons restored order and knotted the contest at 70-all with 6 minutes left.

Jun Manzo swiped the rock from Ahanmisi for the go-ahead fastbreak layup, 74-73, with 3:37 left in regulation.

After an Ahanmisi jumper, Manzo got free with a spin move and drained the clutch floater, 78-75, with 10 seconds left before Lastimosa forced overtime.