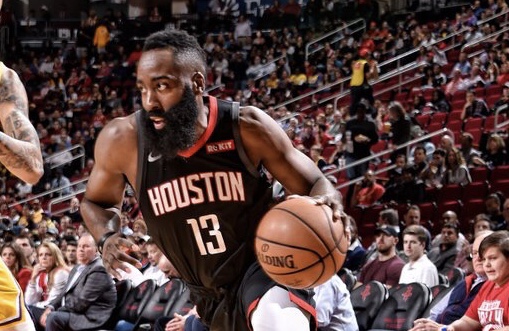 MANILA, Philippines – It was another historic night for the reigning NBA Most Valuable Player.

Harden’s monster performance of 50 points, 11 assists and 10 rebounds powered the Rockets to a 126-111  victory over LeBron James and the Los Angeles Lakers on Thursday, December 13 (Friday, December 14, Manila time).

James Harden had an UNREAL night in Houston.

Harden scored 11 points in the 4th quarter, when the Rockets – who led 90-88 through 3 periods – finally pulled away in a game that featured 13 lead changes and was tied 12 times.

He pulled down his 10th rebound with less than 90 seconds remaining for the 37th triple-double of his career.

The Beard was rolling in the first half!

It was Harden’s second triple-double of the season and his second 50-point game of what has been a frustrating campaign for the Rockets so far.

Houston led the league last season with 65 regular-season wins, but came into the contest next-to-last in the Western Conference.

But Harden expects the Rockets to continue to claw their way back toward .500, improving to 13-14.

“I just believe and trust in all my guys,” he said. “We’ll continue to build.”

Harden said early-season injuries and the addition of new players contributed to the shaky start to the season, but he remained confident the Rockets can be a force in the West.

Even before the game, though, Harden already stole the show when he rolled in the Toyota Center wearing a snakeskin long-sleeve button down and matching short-shorts. The outfit drew mixed reactions.

Versace shorts in December. Shouts out to Texas. pic.twitter.com/3CaP2QG47F

On court, though, Harden made sure to get everyone talking for all the right reasons.

In January, Harden also made history when he scored 60 points – a career-high and franchise-record – on top of 11 assists and 10 rebounds for the first ever 60-point triple-double in NBA history.