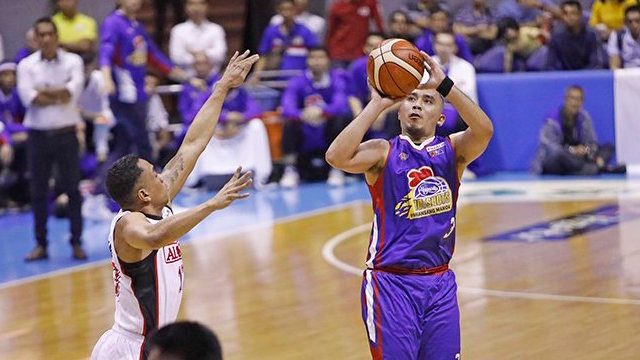 MANILA, Philippines – Paul Lee is no stranger to breaking opponents’ hearts, specifically against Alaska in the finals.

The newly crowned Best Player of the Conference sank a game-winner as Magnolia hacked out a 79-78 win over the Aces on Friday, December 14, and moved one win away from clinching the 2018 PBA Governors’ Cup title.

Off a Romeo Travis blocked shot, Lee secured the offensive board from near the three-point line, stopped from within 15 feet on the right baseline and drilled in a jumper with 1.3 seconds left to seal the win that gave the Hotshots a 3-2 series lead.

Coincidentally, it was from the same spot where he hit a game-winning shot against the Aces in Game 2 of the 2016 Commissioner’s Cup finals back when he was still with Rain or Shine.

With the offensive board landing in his hands following Beau Belga’s missed triple, Lee beat the buzzer with a jumper from the right baseline to give the Elasto Painters a 105-103 win. Rain or Shine won the finals affair, 4-2.

It was a shot that Alaska head coach Alex Compton still has not forgotten.

“Back when they (Rain or Shine) beat us in the finals, Paul hit a buzzer-beater, it’s almost the exact same spot,” Compton told reporters after the game.

“I’m going to have to put something slippery on the floor there in the endgame for Paul. Again, he’s got that spot against us, but I can’t say anything.”

For Lee, who finished with a double-double of 11 points and 10 boards – highlighted by the crucial rebound and the game-winner – it’s all about taking a chance on what could have been a dead play.

(The small details, the 50-50 balls, those are what win games. I got the rebound and I converted the shot so we won.)

Lee and the Hotshots seek to close out the best-of-seven series in Game 6 on Wednesday, December 19, at the Ynares Center in Antipolo City. – Rappler.com