Brawl that shocked the world 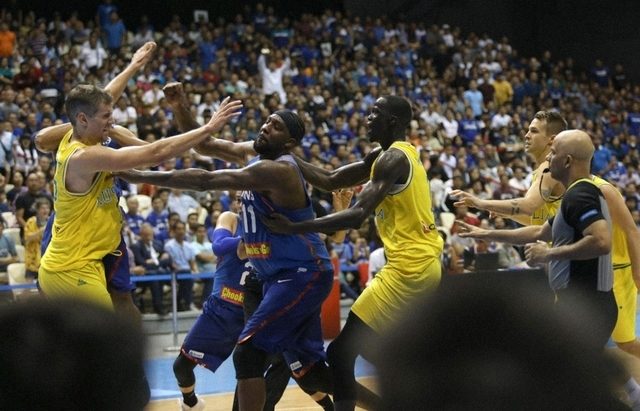 MANILA, Philippines – It was supposed to be a typical year for Gilas Pilipinas as it treads the road to the 2019 FIBA World Cup.

After sweeping both Japan and Chinese Taipei to punch its ticket to the second round of the Asian Qualifiers, the Philippines just needed to face Australia to cap off the first round.

But then things went way out of hand.

Punches, kicks and even chairs were thrown between the Filipinos and the Aussies last July 2 at the Philippine Arena in Bocaue, Bulacan in what’s dubbed “the worst basketball brawl” in recent years.

A total of 13 players – 9 from the Philippines and 4 from Australia – were ejected for their role in the free-for-all.

And as if the game couldn’t get any stranger, it had to be stopped with more than a quarter left as the hosts ran out of players for the contest to continue.

It was a game that stunned the whole basketball world, but what really sparked the melee that saw Jayson Castro landing a Superman punch and NBA player Thon Maker unleashing flying kicks?

According to then Gilas head coach Chot Reyes, it was Aussie Daniel Kickert who got into the Filipinos’ nerves by hitting several players as early as the pre-game shootaround.

A video, though, showed that Abueva tripped Kickert at midcourt, prompting the Aussie to retaliate by pushing Wright in the back.

For his part, Abueva claimed that Australia started it all by bullying them. (Check from the 2:40 mark of the video to see Abueva’s explanation of what transpired.)

With the game already testy even before it began, it seemed like it was just a matter of time before everything blew up.

And it did with 4 minutes left in the 3rd quarter as Pogoy shoved Aussie Chris Goulding to the ground. In retaliation, Kickert decked Pogoy with an elbow to the head.

Pandemonium broke loose after that.

National team veteran Jayson Castro ran from midcourt to land a Superman punch on Kickert. Terrence Romeo punched NBA player Thon Maker in the head after he kicked Andray Blatche in the back.

It became quite like a cat-and-mouse chase between Maker and Romeo as the Aussie tried to get revenge on the Filipino with a flying kick only to badly miss.

The fracas didn’t end there as Peter Aguilar, the father of Gilas forward Japeth, threw a chair at Nathan Sobey. Immediately after, Sobey was knocked down to the floor with a swift punch by Jio Jalalon, who was in street clothes.

Here’s a video I just received from a Filipino source. It shows Nathan Sobey having a chair thrown at him, then getting punched. pic.twitter.com/3506ysEI8z

Several footages also showed Gilas deputy Jong Uichico joining the skirmish. He stormed the court from the Philippine bench and delivered continuous blows on Goulding, who was already taking a beating from Allein Maliksi.

Like Jalalon, Maliksi also did not play in the brawl-marred game.

After more than a minute, security personnel finally had the situation under control as both teams headed to their respective benches.

But it took more than 40 minutes before the contest could continue as game officials meticulously reviewed the incident before deciding which players would be meted out ejections.

Gilas got hit hard as Pogoy, Castro, Romeo, Abueva, Blatche, Cruz, Wright, Aguilar and Troy Rosario were tossed out from the Philippines while Kickert, Goulding, Maker and Sobey were ejected from Australia.

Show must go on

Only June Mar Fajardo, Gabe Norwood and Baser Amer weren’t thrown out from the Filipino side and they had to play 3 against 5 against the Aussies, who still had 8 players to field.

After the two teams traded buckets, the game was prematurely ended with 1:57 minutes left in the 3rd as Fajardo and Norwood fouled out.

Amer still had 5 fouls to give but rules state that there should be at least two players on each team for play to resume.

While the trio received praises for keeping their cool, several Filipinos – including PBA players – expressed their disdain towards the bench-clearing brawl through social media.

Despite the backlash, Reyes backed his wards.