Azkals look to ‘get out’ of 2019 Asian Cup group stage 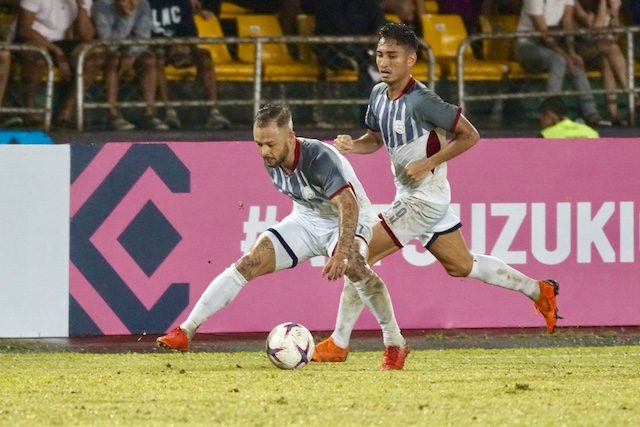 MANILA, Philippines – In its debut in the AFC Asian Cup, the Philippines enters as a heavy underdog looking to stun Asian football powerhouses and make it out of the group stage.

“Certainly not [happy to just be here] in the Asian Cup. You try to expect, you try to hope that you make something out of this,” said Azkals team manager Dan Palami.

“If you get out of the group stage, that for me is a realistic goal for this tournament and hopefully this sets the tone for future Asian Cup participation as well as in the upcoming World Cup qualifications.”

If the Philippines doesn’t land on the top two spots of the group, it has to at least place among the 4 best third-placers from the 6 total groups in the tournament.

The Sven-Göran Eriksson-mentored Azkals are fresh off a 2018 ASEAN Football Federation (AFF) Suzuki Cup campaign that saw them miss the title round for the fourth time after losing to eventual champion Vietnam in the semifinals.

The Philippines had lost to injury Javi Patiño, who could’ve provided more firepower to their Suzuki Cup campaign – especially with the depleted lineup towards the knockout stages. (READ: No Etheridge in Azkals lineup for Asian Cup)

But with the Filipino-Spanish forward returning to the roster and Danish Superliga keeper Kevin Ray Mendoza Hansen tapped to reinforce the last line of defense, the Azkals went back to business during the holidays as they flew to Qatar for their training camp last December 26.

Not many people get to nutmeg Sven Goran Eriksson haha  So clean, Sven didn’t even notice  haha A nice little cool down session after our friendly game yesterday. 6 days until our opening game vs South Korea. It should be a tough one. Hoping all the filipinos around the world can come together and support us  @rldesignz @433 @joe_co_uk @afcasiancup @theazkals @schroecky @jamesyounghusband7 #nutmeg #football #soccer #panna #asia #southeastasia #philippines

In Qatar, the Azkals faced Vietnam again in a friendly and managed to score two goals in a 2-4 loss to the 2018 Suzuki Cup champion in a three-period match of 30 minutes each.

The Azkals are bunched together with regular World Cup team South Korea, a Marcello Lippi-led China and Kyrgyzstan in a tough Group C.

The Nationals are opening their campaign with a baptism of fire, as they face South Korea on Monday, January 7.

This is the same South Korea team that knocked 2014 FIFA World Cup champion Germany out of the group stage in the last World Cup in Russia.

However, English Premier League forward Son Heungmin of Tottenham Hotspur FC will be absent for the opening game and will make his Asian Cup debut against China instead.

Son, who was named Asia’s best footballer for the fourth time, scored two goals in the 2018 World Cup – including the late second that blanked Germany.

The Philippines will have to be ready for a hungry South Korea that is looking to end its 59-year Asian Cup title drought.

China will be entering as the oldest team of the tournament with an average age of 28.47 years old.

Despite the aging squad, Team Dragon still remains to be a favorite to make it through the group stage with the veteran presence of former Charlton Athletic midfielder and captain Zheng Zhi and 2018 Chinese Super League’s (CSL) topscorer Wu Lei of Shanghai SIPG.

The 22-year-old Wu Shihao adds a flavor of youth to the veteran team as he carries experience from his stints in Europe before moving back to China.

But China hasn’t been in its best form after winning only one of its last 6 friendly matches, which contributed to the 70-year-old Lippi’s decision to make this Asian Cup the swan song of his decorated coaching career.

China acquired Lippi’s services in 2016 for his impressive resumé, which includes a 2006 World Cup title with Italy and golden stints with Guangzhou Evergrande in the CSL.

Kyrgyzstan also makes its Asian Cup debut this year after qualifying as the Group A runner-up from the third round of qualifications.

Despite India winning the group, the Central Asians were placed in Pot 3 before the draw, and it looks to prove its supremacy over the Philippines.

The last group stage match between the Philippines and Kyrgyzstan on January 16 will be a rematch of the two 2016 friendlies where the Azkals managed to win both matches.

However, Russian coach Aleksandr Krestinin looks to show the Philippines that the team has been flashing a renewed attacking form that can pose a threat to the Azkals’ bid to advance to the Round of 16. – Rappler.com