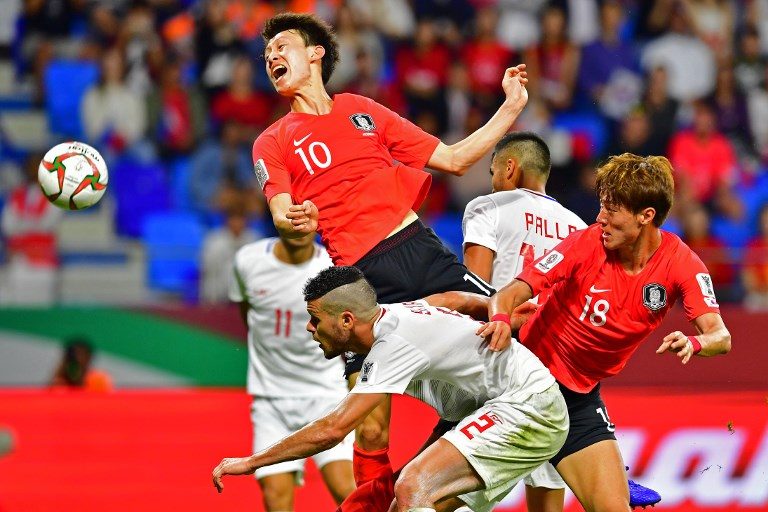 Facebook Twitter Copy URL
Copied
Despite the loss, the Philippine Azkals surpass expectations by holding the Asian powerhouse to a scoreless first half

Despite the loss, the national men’s football team defied expectations and put up a gallant fight against the continental powerhouse that has seen action in 8 straight World Cup editions.

Hwang Ui-jo delivered for South Korea with a close-range strike in the 67th as the Azkals defense broke down.

South Korea moves to 2nd place with its first 3 points but only with a +1 GD, while the Philippines remains at the bottom at 0 in Group C.

Javier Patiño – who missed the 2018 Suzuki Cup due to injury – provided the needed firepower for the Azkals throughout the game.

The Filipino-Spaniard had a big chance in the 53rd minute as he fired a shot off a combination play with Patrick Strauss which was stopped by KimKim Seung-gyu.

“[South Korea] played well, they won, and we cannot complain too much about that. But anyhow, I think we should be proud, I am proud with what we did out there,” said Azkals head coach Sven-Göran Eriksson.

South Korea lorded over the Philippines with an 80% possession rate, but the former England World Cup coach was impressed with the Azkals’ efforts.

“We stood up to them, they had the ball much more than we had, but we created some chances and with a little bit more luck, we could’ve done a different result for sure.”

Prior to the goal, the Azkals were getting their groove as Patrick Reichelt led the counterattack on the Asian football powerhouse.

In the 56th minute, Reichelt broke away from the Korea defense with Patiño positioned to receive his cross, but keeper Kim Seung-gyu collected his cross before it reached the striker.

The Azkals impressed early after holding South Korea to a scoreless first half.

While most chances favored the Koreans, Alvaro Silva anchored the Philippines’ defense early on and his presence proved to be crucial throughout the match.

Defender Daisuke Sato paved way for the Azkals’ 40th minute chance as Patiño managed to break away and fired a shot that threatened the South Korean shot-stopper to make a deflection. – Rappler.com