Aldridge erupts for 56 as Spurs outlast Thunder in 2OT thriller 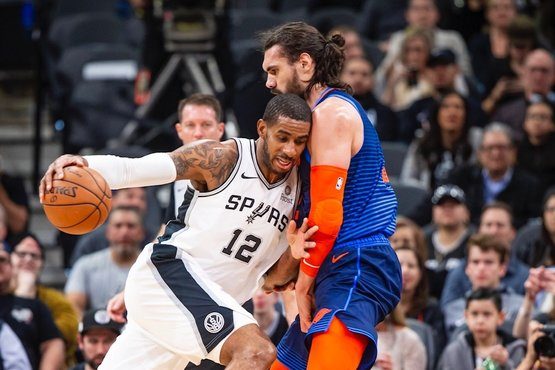 Aldridge’s epic performance saw him surpass his previous career-high of 45 points, which he set against Utah last March.

He rattled off 7 points in the 2nd overtime as the Spurs outlasted the Thunder one day after having one of their worst shooting performances of the season in a 96-86 loss to Memphis.

“We had to stay calm and get it done down the stretch, and we did.”

Westbrook also delivered a monster game for the Thunder, finishing with 24 points, 13 rebounds and a career-high 24 assists.

Recap the fantastic finish in the @spurs 154-147 victory over the @okcthunder. pic.twitter.com/yadFdlVp04

The Spurs have won 6 of 7 games – and 14 of 18 – to close within a game of the Thunder for 3rd place in the Western Conference.

This was their first meeting of the season and Oklahoma City will get a chance for revenge on Saturday when they host the Spurs.

Paul George finished with 30 points and Jerami Grant had 25 points and 12 rebounds for the Thunder, who lost their seventh consecutive game in San Antonio.

DeMar DeRozan scored 16 points and 11 assists but shot just 7-of-22 from the floor and missed potential game-deciding shots at the end of regulation and the end of the 1st overtime.

San Antonio made its first 14 three-pointers to set a franchise record. After their initial success from beyond the arc, the Spurs switched gears and got the ball down low to Aldridge with the game on the line.

“We try to play inside out and it worked tonight,” Aldridge said.

Nikola Jokic tallies his 5th triple-double of the season in the @nuggets victory! #MileHighBasketball pic.twitter.com/vgOmrutEXq

In Denver, Nikola Jokic finished with 18 points, 14 rebounds and 10 assists for his 21st career triple-double to help the Western Conference-leading Denver Nuggets stretch their home winning streak to 11 by routing the Los Angeles Clippers, 121-100.

Jamal Murray scored 23 points and Mason Plumlee added a season-high 17 points to go with 12 rebounds for the Nuggets. They’re now 17-3 at home.

Lou Williams led the Clippers with 19 points, and Danilo Gallinari tallied 18 against his former team. – Rappler.com