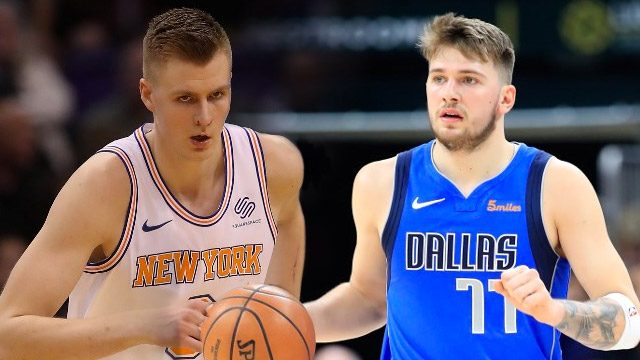 The 7-foot-3 Porzingis – who reportedly requested for the trade after expressing frustration with the Knicks’ losing ways and uncertainty in the franchise’’s direction – got sent to the Mavs  along with guards Tim Hardaway Jr, Courtney Lee and Trey Burke, in exchange for guard Dennis Smith Jr, center DeAndre Jordan, swingman Wesley Matthews and two future first-round draft picks on Thursday, January 31 (Friday, February 1, Manila time).

“As is standard for this time of year, we were exploring various option on potential trades,” said Knicks general manager Scott Perry in the team’s official release. “Considering uncertainty regarding Kristaps’ free agent status and his request today to be traded, we made a trade that we are confident improves the franchise.”

Porzingis, who will become a restricted free agent this summer, averaged 17.8 points, 7.1 rebounds, 2.0 blocks in 186 games with the Knicks.

But the fourth overall pick in the 2015 NBA Draft suffered a season-ending ACL injury against the Milwaukee Bucks on February 6, 2018. He has yet to play in the 2018-2019 season.

The Slovenian rookie recently had an incredible outing against the Raptors where he recorded 30 points, 12 rebounds and 10 assists to become the league’s first teenager with a 30-point triple double, as well as  the first teen to register multiple triple-doubles.

Porzingis will also get to team up with Mavs legend Dirk Nowitzki, the first NBA player to see action for 21 consecutive seasons for the same franchise.

The 7-foot, 40-year-old German, who’s likely to retire by the end of the season, is the only international player in the league with more than 30,000 career points.

What's better than one ? How about two?

The Knicks (10-40) have the worst record in the NBA and are already going to get a high pick in the entry draft.

“We started to get a feel, we could see that he wasn’t completely buying into what we were trying to do,” Knicks president Steve Mills said. “And again, (during Thursday’s meeting) we wanted a confirmation from him whether he was completely in or out. He made it clear to us when he came in to meet with us that he no longer wanted to be part of our group.”

The Mavericks are hoping to re-sign Porzingis, who will be a free agent, to a long-term deal in the offseason. – Rappler.com