Of all instances, power shortage strikes on Meralco game

Feb 2, 2019 11:10 PM PHT
Delfin Dioquino
Facebook Twitter Copy URL
Copied
As if it is a bad omen, the Bolts succumb to their third loss in 5 games moments after the blackout 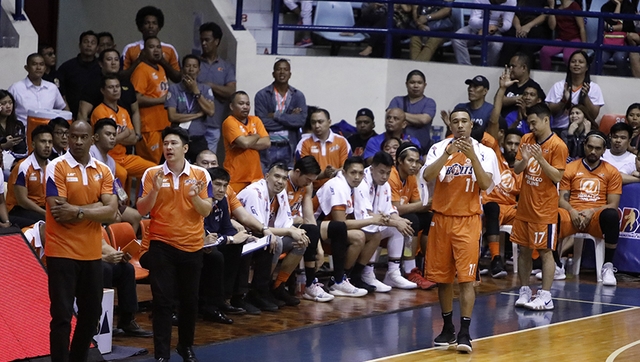 ANTIPOLO CITY, Philippines – A lengthy power outage struck the PBA at the Ynares Center here and incidentally, it was during a game involving Meralco – the country’s biggest electric company.

Players resorted to a shootaround as the lights went out for a good 15 minutes late in Meralco’s clash against NLEX in the 2019 Philippine Cup on Saturday, February 2.

And as if it was a bad omen, the Bolts went on to succumb to the Road Warriors, 83-87, and slumped into their third loss in 5 games this conference.

But Meralco head coach Norman Black said the blackout barely had a hand in their defeat.

Still no sufficient lighting here at the Ynares Center in Antipolo City for play to continue. 2:57 minutes remain with NLEX holding a slim 81-78 lead over Meralco. #PBA2019 | @dioquinodelfin pic.twitter.com/JxS3Xy2sdx

“Having a brownout is never good. But it doesn’t really benefit or hurt either team in a sense that we have to both deal with it,” he told reporters after the game.

“Certainly can’t use it as any type of excuse. We had our chances. So many easy shots that we missed.”

Funny or ironic as it may have looked, Black said he is sure Meralco is not behind the power failure.

“It’s definitely not funny. We lost. If we had won, it would have definitely been funny. But we lost,” he said with a wry grin.

“I don’t think Meralco had to do anything with the brownout. Talk to the management here at Ynares Gym.”

Meralco, which carries a 2-3 card, has almost two weeks to prepare before it tangles with Columbian on February 13 at the Mall of Asia Arena. – Rappler.com