Rain or Shine toys with injury-plagued Alaska for 4th win 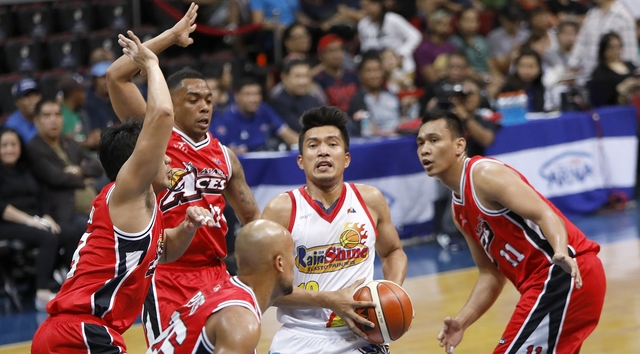 MANILA, Philippines – Rain or Shine capitalized on Alaska missing 4 of its usual starters and cruised to a wire-to-wire 85-72 win in the 2019 PBA Philippine Cup at the Mall of Asia Arena on Sunday, February 2.

All but one of the fielded players scored for the Elasto Painters as they banked on a balanced attack to notch their fourth win in 5 games and spoil the Aces’ debut this season.

Rey Nambatac scored a team-high 12 points while Maverick Ahanmisi filled the stats sheet with 8 points, 14 rebounds, 5 assists and 3 steals in the win that saw Rain or Shine pull away as early as the maiden period.

It was a neck-and-neck joust with the score knotted at 12-all until the Elasto Painters capitalized on the Aces’ depleted lineup to erect a 13-2 run and enter the 2nd quarter with a 25-14 advantage.

Rain or Shine’s lead grew to as large as 22 points and Alaska failed to trim its deficit to a single digit even with a few runs here and there.

Beau Belga finished with 11 points, 6 rebounds and 5 assists, Raymond Almazan had 10 markers and 4 boards and James Yap delivered 9 points in the win.

Jeron Teng delivered 15 points, 6 rebounds and 3 assists for the Aces, who missed the services of Vic Manuel, Simon Enciso, JVee Casio and Kevin Racal due to injuries.

Making their presence felt in the loss are Jake Pascual, who had 12 points, 9 rebounds and 3 steals, and Chris Banchero, who churned out 11 points, 6 rebounds and 2 steals.