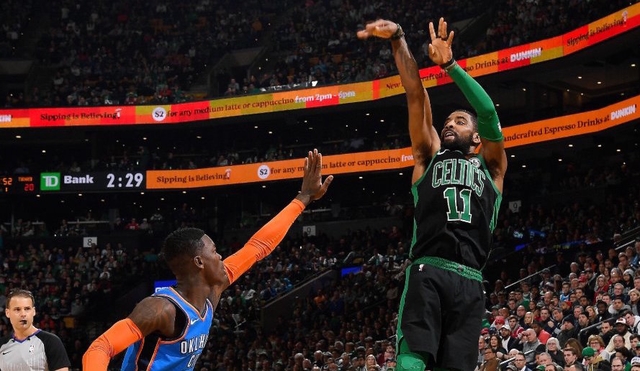 Marcus Morris added 19 points and Marcus Smart netted 18 as 8 of 9 players taking the court for Boston scored in double figures and the Celtics improved to 34-19, matching Philadelphia for 3rd in the Eastern Conference.

“We have great continuity, great rhythm,” Irving said. “Playing the best we can every single day.”

The Thunder fell to 33-19, 4 games adrift of Western Conference leaders Denver and Golden State, despite a sixth consecutive triple-double from Russell Westbrook, who had 22 points, 16 assists and 12 rebounds.

Westbrook hit a three-pointer, made a steal and sank two free throws to pull the visitors within 121-119 in the final minutes.

Jerami Grant’s three-pointer pulled the Thunder within 129-128. Boston’s Jayson Tatum hit only 1-of-2 free throws but Irving forced a Westbrook turnover and Tatum added two more from the line to give the Celtics a 132-128 edge with 7.4 seconds to play.

OKC needed a bucket and Russ took it himself vs. three defenders.

Westbrook sank a free throw but missed the rim on his second attempt trying to set up a Thunder rebound and the Celtics took the ball, Smart hitting two final free throws to seal the victory.

“Down the stretch it’s winning time. Just like that,” Irving said. “That’s a great team over there. It was a great challenge.”

The Thunder reeled off 11 points in a row in just over two minutes for a 76-73 lead in the 3rd quarter but Morris answered with a corner three-pointer to begin a 12-2 Boston run and the Celtics bounced back to lead 99-93 entering the 4th quarter.

“We played with more aggressiveness on offense and we moved better on defense,” said Celtics coach Brad Stevens, whose club improved to 20-0 at home when leading after 3 quarters.

The Celtics hit a season-best 59% of their shots from the floor.

At Toronto, the host Raptors ripped the Los Angeles Clippers, 121-103, behind 18 points from Kawhi Leonard plus 16 points and 12 rebounds from Congo-born Spaniard Serge Ibaka.

Canada’s Shai Gilgeous-Alexander, a 20-year-old guard playing in his homeland, led the Clippers with 19 points.

The Raptors improved to 38-16, 2nd in the East by 1.5 games to Milwaukee, while the Clippers fell to 29-25, clinging to the last Western Conference playoff spot by one game over Sacramento.

Conley added 8 rebounds and 7 assists while Gasol contributed 9 rebounds and 5 assists for Memphis, which also had 19 points from Justin Holiday.

New York’s league-worst record slid to 10-42 after a 13th consecutive loss while the Grizzlies, second worst in the Western Conference, improved to 21-33.

Kevin Knox led the Knicks with 17 points while DeAndre Jordan, in his first game after arriving in a deal with Dallas, contributed 12 points and 12 rebounds. – Rappler.com