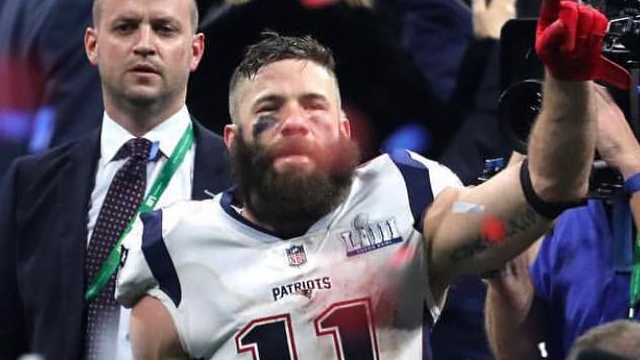 ATLANTA, USA – Julian Edelman was named the Super Bowl’s Most Valuable Player on Sunday, February 3 (Monday, February 4, Philippine time) crowning his return from over a year on the sidelines after a serious knee injury and a drug ban.

Edelman becomes just one of 7 wide receivers to win the Super Bowl’s MVP award following a dogged display in the New England Patriots’ 13-3 win over the Los Angeles Rams.

Edelman finished with 10 receptions for 141 yards and added an eight-yard rush during a performance which saw him repeatedly bail out the Patriots at key moments.

It completed a difficult journey back for Edelman, who was left facing an uncertain future in late 2017 after rupturing knee ligaments in pre-season.

The 32-year-old was then hit with a drug suspension last year which saw him banned for the 4 opening games of the season.

“Tough times don’t last, tough people do,” Edelman told reporters on Sunday. “I preach that, and I guess you have to live to it.”

A year ago, Edelman was a frustrated spectator as the Patriots lost Super Bowl 52 to the Philadelphia Eagles in Minneapolis.

“Injuries are psychologically so hard for an athlete because you don’t get to do what you love to do,” he said.

“When your team is going out there and playing in the Super Bowl and you don’t get to help, it was definitely tough. But we have it this year so we’re good.”

Edelman, meanwhile, was showered with praise by Patriots quarterback Tom Brady, who paid tribute to the receiver’s fighting spirit after the win.

“What didn’t I see in Julian?” Patriots quarterback Brady said. “I mean he just played the best game he has all year.”

“He’s a fighter man that kid. I’m just so proud of him. He’s been an incredible player for this team in the playoffs and he just cemented himself again in the history of the NFL for what his accomplishments are.”

Edelman, a close friend of Brady off the pitch, credits the quarterback with helping his career.

“He is like a brother to me,” Edelman said of Brady. “He has been a huge part of mentally kind of coaching me. It’s an honor to play with a guy like that.”

Edelman, meanwhile, was unapologetic over the dour nature of Sunday’s game, the lowest-scoring Super Bowl in history.

“It wasn’t pretty, but I’ll take that ugly win over a pretty loss any day,” he said. – Rappler.com