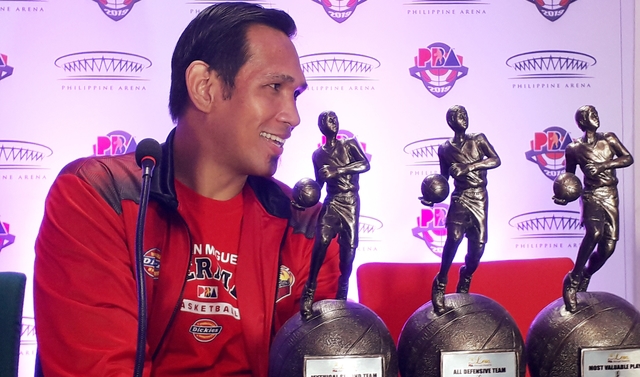 MANILA, Philippines – June Mar Fajardo leads 3 other elite athletes who will be recognized with special individual titles in the SMC-PSA  (Philippine Sportswriters Association) Annual Awards Night on February 26 at the Manila Hotel.

The 6-foot-11 Fajardo is again the recipient of the Mighty Sports Mr Basketball award, marking the fifth straight year the San Miguel Beer main man is going to be feted with the honor by the country’s oldest media organization.

The Cebuano big man, also a regular fixture for Team Pilipinas, will be joined by Jaja Santiago, Marck Espejo, and Neil Etheridge, who are going to be distinguished for their individual feats in their respective fields during the event presented by MILO, the Philippine Sports Commission (PSC), and Cignal TV.

Santiago will be accorded the title Ms Volleyball title for the very first time while Espejo is hailed Mr Volleyball for the second straight year.

Etheridge meanwhile, is the 2018 Mr Football.

The 6-foot-5 Santiago won the UAAP Season 80 MVP while steering the National University Lady Bulldogs to a Final Four stint. She was also a member of the national team to the Asian Games and Asia Cup and is the first Filipino import to play in the Japan V. Premier League.

Espejo, meanwhile, bagged a fifth straight MVP during Season 80 of the UAAP and guided the Ateneo Blue Eagles to a runner-up finish behind National University. Like Santiago, the 21-year-old hitter from Marikina is also in Japan playing for local club Otta Miyoshi Weisse Adler.

For his part, Etheridge made history last year by becoming the first Filipino and Southeast Asian player to play in the English Premier League after hooking up as goalkeeper of Cardiff City.

Highlight of the affair also presented by the Philippine Basketball Association, NorthPort, Rain or Shine, ICTSI, SM Prime Holdings, and Chooks To Go is the awarding of the coveted PSA Athlete of the Year Award. (READ: Golden girls to be honored as PSA Athletes of the Year)

The honor will be bestowed on an all-ladies cast composed of weightlifter Hidilyn Diaz, golfers Yuka Saso, Bianca Pagdanganan, and Lois Kaye Go, along with skateboarder Margielyn Didal.

Olympian and bemedalled athlete Bea Lucero-Lhuillier will be the special guest speaker of the yearly award. – Rappler.com