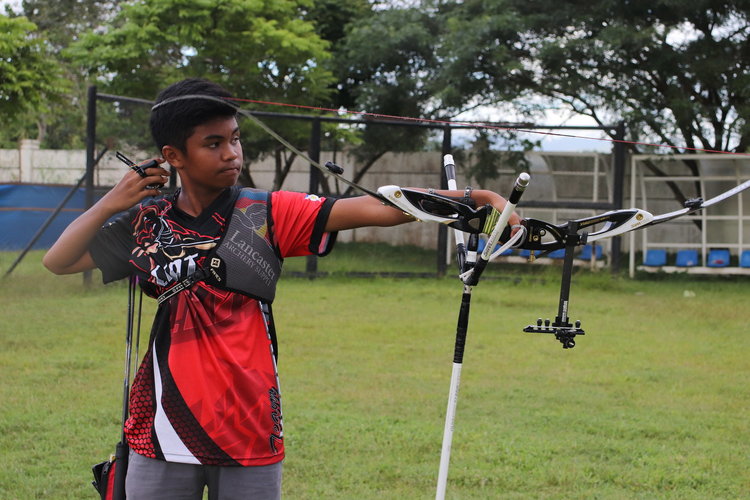 TAGUM CITY – John Carlo Loreno penned a fitting ending to his storied campaign as he grabbed his seventh gold medal to complete a sweep of the archery competition of the 2019 Batang Pinoy Mindanao leg Friday, February 8, at the Davao del Norte Sports and Tourism Complex archery range here.

The 15-year-old marksman from Koronadal ruled the 13-15 boys’ Olympic round event, 6-5, to nail his seventh gold medal in this prestigious age-group tourney organized by the Philippine Sports Commission and Province of Davao del Norte.

Prior to that, he dominated the 30m, 40m, 80m, 60m, single fita and cadet mixed team event together with Precious Micah Basadre, who captured 6 golds and a silver medal, including the Olympic round where she ran away with a 6-2 victory.

Actually, it could have also been a golden sweep for Basadre, but she faded in the crucial stretch of the 13-15 girls’ 60m event Tuesday, leaving her with a consolation prize of a silver medal in this event that also has STI College-Tagum and Alfalink Total Solutions Corp. as major sponsors.

Still, the feat is worth celebrating.

“I was expecting to have a strong performance because we had intense training before this competition,” said Loreno, who is looking to bounce back from a so-so performance in the national finals in Baguio City last year.

“I just had two silver and a bronze medal last year because I had difficulty getting used to the cold weather in Baguio. This time, I’m ready. I will prepare hard for the national championship.”

Basadre, for her part, stressed that her failure to sweep only fanned her eagerness to train hard and, soon, represent the country in major international competitions.

“I see it more as a challenge,” said the Grade 9 student from Koronadal National Comprehensive High School.

“This is not a failure, but a challenge for me to work hard in training.

All in all, Koronadal archers cornered a total of 20 gold, 7 silver and 3 bronze medals for the lion’s share of the city’s golden haul.

Davao City, which dominated the swimming events, remains at the helm with 32 gold, 25 silver and 41 bronze medals as of late Thursday, putting it on the verge of retaining its overall title.