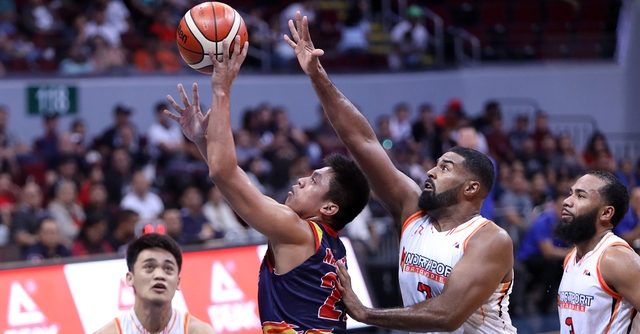 MANILA, Philippines – Exposure was the only thing Rey Nambatac needed.

The former Letran Knight played a key role in Rain or Shine’s come-from-behind 107-100 win over NorthPort on Friday, February 8, that marked the team’s fifth win in 6 games in the 2019 PBA Philippine Cup.

Struggling for just 4 points in the first 3 quarters, Nambatac poured in 7 points in the payoff period as the Elasto Painters raced from a deficit as large as 12 points to stun the Batang Pier.

He finished with 11 points, 4 rebounds, 2 steals and 1 assist in 20 minutes off the bench and iced the win by scoring 3 of his side’s last 5 points.

(I’m happy that I’m slowly given a break by coach.)

(Whenever I’m inside the court, I will always fill what the teams needs, which is hustle and defense. And I never forget about my role for the team.)

Nabbed by Rain or Shine as the seventh overall pick in the 2017 Rookie Draft, Nambatac had a relatively quiet campaign last season with norms of 4.8 points, 2.4 rebounds and 1.2 assists in 14.3 minutes per game.

But Chris Tiu’s retirement from the PBA meant more opportunities to shine for Nambatac, and he has seized every moment to strut his stuff.

Although seeing his minutes dip to just 13 minutes this conference, he has upped his numbers to 8.0 points and 3.5 rebounds.

(It’s hard to fill the shoes left by Chris Tiu so I just stick to my role and go hard on defense because defense is the bread and butter of our team.)

Nambatac and Rain or Shine shoot for their sixth win against unbeaten Phoenix on Sunday, February 10, at the Araneta Coliseum. – Rappler.com