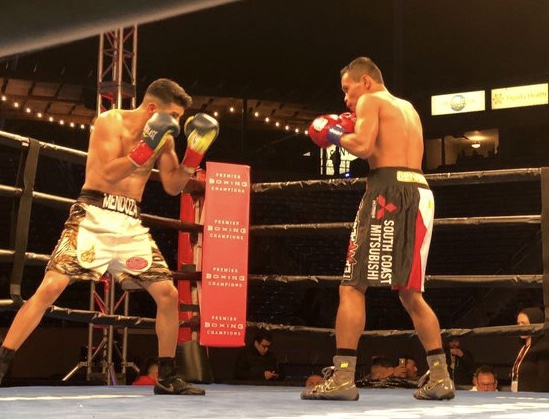 MANILA, Philippines – Deprived of his United States debut 3 weeks ago, Genisis Libranza made sure he would gain instant recognition when given the chance again.

The 25-year-old Libranza was supposed to see action in the undercard of the Manny Pacquiao-Adrien Broner collision for the World Boxing Association welterweight crown on January 19, but his supposed opponent, Carlos Buitrago came in 5 pounds over the limit and the bout was cancelled.

Fortunately for Libranza, international matchmaker Sean Gibbons and MP (Manny Pacquiao) Promotions head Joe Ramos were able to schedule him against Mendoza in the undercard of the Gervonta Davis-Hugo Ruiz  battle for the WBA super featherweight belt.

Davis caught Ruiz with a thunderous right hook and won via first-round knockout, extending his unbeaten run to 21 with an amazing 20 knockouts.

The Agusan del Sur-born and Davao-based Libranza, fighting out of Nonoy Neri’s Boxing Stable, on the other hand, struggled past Mendoza in their eight-rounder.

“He fought so different from all his YouTube fights I have seen. He was supposed to be an aggressor and our plans were to counter, but it turned out the other way around. I had to adjust mid-fight and luckily, I was able to get the win,” Libranza told Dr Ed de la Vega of Philboxing.

Libranza, who was trained by Ting Arriosa before Neri returned to the US last week and took over, raised his record to 18-1 with 10 knockouts, and though he failed to finish off Mendoza (11-7-2), did well enough to be considered for more US fights.

Born in Bacolod but is now based in Japan, Servania, 32-1, with 15 knockouts, is bracing for a tough fight against Castro, who is 21-0 with 9 knockouts. – Rappler.com