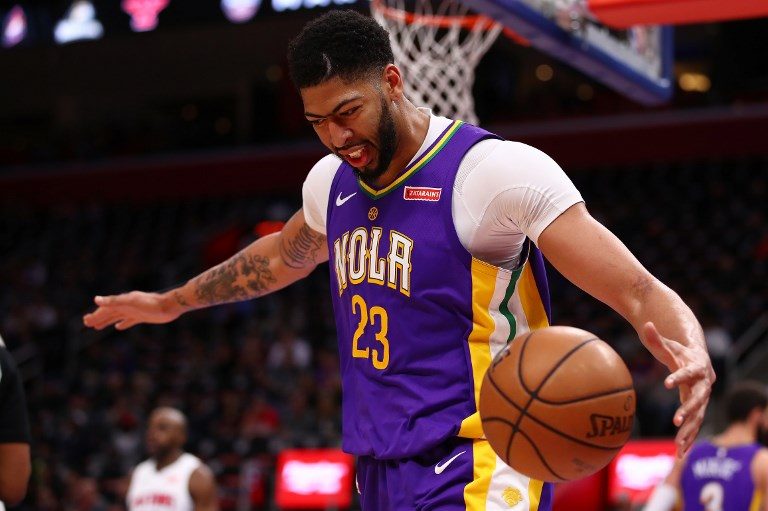 CHARLOTTE, USA – New Orleans Pelicans star Anthony Davis said he would welcome a trade to the Boston Celtics or any other NBA team, stretching his desired list of prospective new clubs.

The 25-year-old forward repeated his desire to play on Saturday, February 16 (Sunday, February 17, Manila time), a day before the 68th NBA All-Star Game but said he would have to see how his bruised left shoulder felt ahead of tip-off in Charlotte, North Carolina.

Davis has been the talk of the NBA the past couple of weeks since he confirmed what his agent revealed, that the star big man wants a trade from the Pelicans and won’t sign a new long-term deal with New Orleans.

“I just want to go to a team that wins,” Davis said.

No deal was struck by last week’s NBA trade deadline, with reports that Davis first wanted a deal only to New York or the Los Angeles Lakers, later adding Milwaukee and the Los Angeles Clippers to the list.

At that time, the Boston Celtics were thought to be the team with the most to offer the Pelicans in return but the report revealing Davis wanted out in New Orleans indicated he did not want to go to Boston.

Davis says that’s not so, repeating several times on Saturday of the Celtics that “they are on my list” while telling the NBA’s television network “all 29 other teams are on my list” and he had no preferred destination.

After the Lakers were spurned in overtures for Davis, the Pelicans announced the dismissal Friday of general manager Dell Demps, who couldn’t build a consistent winner. (READ: Former PBA import Dell Demps out as Pelicans GM)

“I didn’t know anything about it but the Pelicans are going to do what’s best for them,” Davis said. “My intentions are still the same no matter who the GM is. The Pelicans made a move for what’s best of their organization and I’m going to go out and play basketball with my teammates.”

‘Not stressful at all’

Davis says he intends to play for the Pelicans for the final two months of the season, with New Orleans unlikely to rise from third-worst in the Western Conference to a playoff spot.

“We wanted to get something done and it didn’t happen, so my job is to play and that’s what I’m going to continue to do,” Davis said.

Davis has another season on his contract but said he won’t sign a new deal until he becomes a free agent in July 2020. That could make some teams think twice about devoting major talent for a trade deal only to watch Davis leave after the 2019-20 campaign.

“It wasn’t stressful at all for me,” Davis said. “I had a plan, and I had steps to follow that plan and did what I’m supposed to do.

“I knew there was a chance it probably wasn’t going to happen, because the Pelicans have to make that decision. But I followed that plan and nothing happened, so I’m still here playing basketball until the end of the season.”

After that, the Pelicans could field offers to avoid having Davis leave in 2020 without anything in return for New Orleans. – Rappler.com