Feb 23, 2019 9:57 AM PHT
Agence France-Presse
Facebook Twitter Copy URL
Copied
The Minnesota Timberwolves star misses a game for the first time in his NBA career after suffering a possible concussion in a car crash 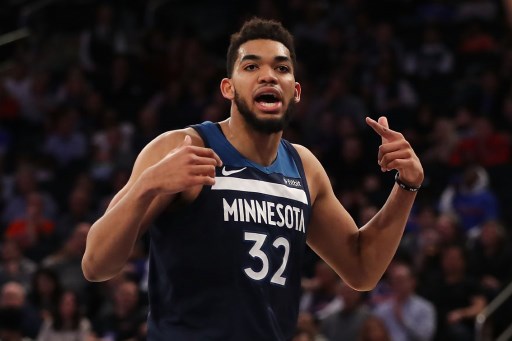 NEW YORK, USA – Minnesota Timberwolves center Karl-Anthony Towns suffered a possible concussion in a car crash as he was driving to the airport to catch a team flight.

Coach Ryan Saunders said Friday, February 22 (Saturday, February 23, Manila time) that Towns would miss the NBA team’s game against the New York Knicks at Madison Square Garden. It is the first time Towns has missed a game in his career.

Towns was involved in the smash on Thursday in the Minneapolis area and flew into New York later that day on a separate flight so he could join his teammates. Saunders said Towns was resting back at the team’s hotel.

“That’s most important, that he’s healthy and he’s doing OK,” teammate Andrew Wiggins said. “Because a lot of things could have went wrong.”

Said guard Tyrus Jones, “It just goes to show nothing’s promised.  Tomorrow isn’t promised. Life and things can turn in a matter of seconds in the blink of an eye.”

At 27-30, the Timberwolves are 4 games behind the Los Angeles Clippers for the 8th and final playoff spot in the Western Conference.