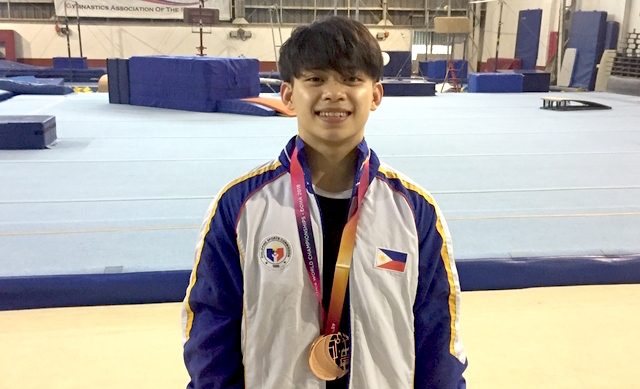 MANILA, Philippines – Filipino teen gymnast Carlos Yulo opened the year on a high note after clinching gold in the men’s floor final of the 2019 Melbourne World Cup in Australia on Saturday, February 23.

Finishing 3rd place in the qualifying round, Yulo – who just turned 19 on February 16 – turned it up in the final for his first gold medal in a World Cup as a senior.

Arayashiki bagged silver while Zapata and Cunningham both settled for the bronze.

Yulo was coming off a successful 2018 campaign, capturing a historic bronze in men’s floor of the World Artistic Gymnastics Championships to become the first Filipino and male Southeast Asian gymnast to win a medal in the worlds.

This year, he plans to accumulate as much points in different World Cups in order to earn a spot in the 2020 Tokyo Olympics. (READ: Teen gymnast Carlos Yulo finds winning rhythm in Olympic quest) – Rappler.com