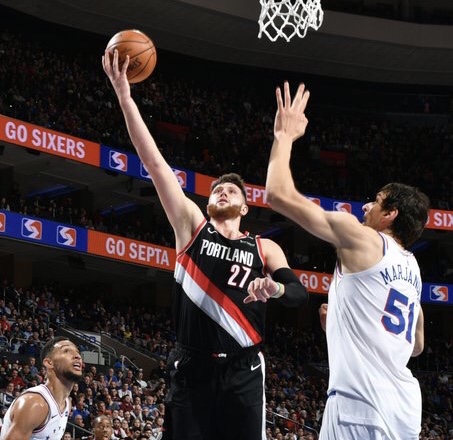 Bosnian Jusuf Nurkic scored 24 points and pulled down 10 rebounds and Damian Lillard added 17 points for the Trail Blazers, who solidified their 4th position in the Western Conference at 36-23.

Cameroonian center Embiid missed his second straight game with a sore left knee, and the Sixers expect to be without him again when they travel to New Orleans to take on the Pelicans on Monday.

Aussie star Ben Simmons tried to pick up the slack, matching his season high with 29 points to go with 10 assists and 7 rebounds.

But Philadelphia missed Embiid on the defensive end and the Trail Blazers notched their second win of the season over the Sixers with Embiid on the sidelines, after their 34-point triumph on December 30 in Portland.

“They’re not the same team without Embiid, obviously, he’s a big part of what they do,” said Trail Blazers coach Terry Stotts, who was pleased with what he saw from his own players, who outscored Philadelphia, 41-26, in the 3rd quarter to take control for good.

“I thought we really played well defensively,” he said. “We helped each other.”

The victory gave the Blazers a 2-0 start on their seven-game road trip.

“Getting these first two is huge for our momentum and us feeling good about ourselves,” Lillard said. “And also, they were two games that we could have easily lost. So I think we should feel good about it but understand that this is only the beginning of the trip.” – Rappler.com