Feb 25, 2019 3:16 PM PHT
Delfin Dioquino
Facebook Twitter Copy URL
Copied
It looks like the fiery mentor will keep his job after making it clear he's willing to drop his position as head coach if the Philippines failed to reach the World Cup 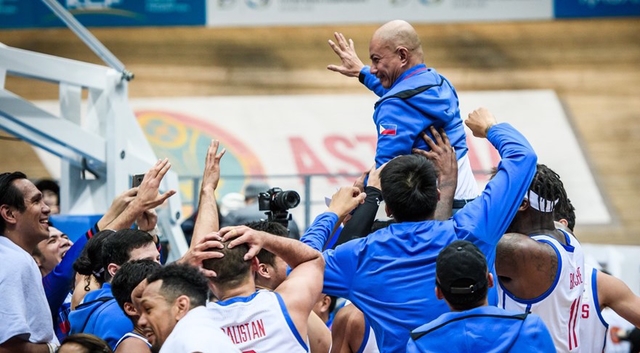 Yeng Guiao can finally breathe a huge sigh of relief as Gilas Pilipinas got the job done by becoming one of the 32 nations that will advance to the 2019 FIBA World Cup in China.

In order to book a trip to the World Cup, the Philippines needed to defeat Kazakhstan in its last Asian Qualifiers match and for either of Lebanon, Jordan or Japan to lose their final game.

Both happened as the Philippines blasted Kazakhstan, 93-75, while Lebanon suffered a 72-84 loss to Korea in on Sunday, February 24. (READ: Thanks, Kuya Cardo: Korea’s Ratliffe hailed as Gilas reaches FIBA World Cup)

“We’re just glad it’s over,” a relieved Guiao said in the post-game presser. “We were feeling the pressure prior to this game. We really wanted to make the World Cup.”

It was a roller-coaster ride for the Philippines leading up to clinching a World Cup berth as it absorbed two heartbreaking home defeats to Kazakhstan and Iran in the fifth window.

The losses relegated the Philippines from the top 3, which guaranteed a seat in the World Cup, to 4th place in Group F.

At that time, Guiao made it clear he was willing to drop his position as national team head coach if the Philippines will fail to reach the global basketball meet.

“I also stated that if I cannot bring this team to the World Cup, I’ll walk away. So we’ll see,” Guiao said then.

But it looks like the fiery mentor will keep his job as he braces the Philippines for the World Cup, which will be staged from August 31 to September 15.

“We’re just happy that it was over and we’re glad we’re making the World Cup,” Guiao added. – Rappler.com