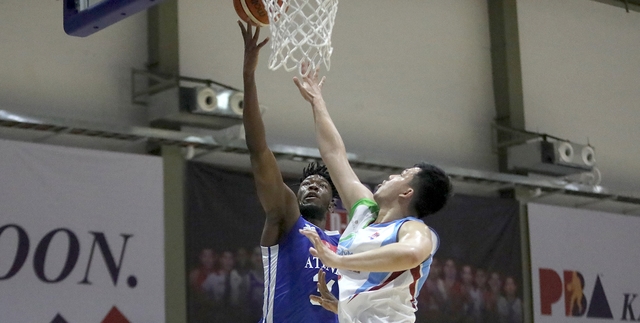 MANILA, Philippines – Cignal-Ateneo survived Family Mart-Enderun’s assault and took an 82-68 win in the 2019 PBA D-League at the Paco Arena on Monday, February 25.

Streaky guard Tyler Tio was instrumental in helping the Blue Eagles break off from the Titans, pouring 20 points – 14 coming in the payoff period – and going 6-of-9 (67%) from beyond the arc.

Tio’s sudden explosion in the 4th broke the game wide open as Ateneo wiggled out of Enderun’s reach to take a 19-point lead, 79-60.

Ivorian center Ange Kouame was a force to be reckoned with down low as he also got 20 markers, 8 boards, 5 blocks, and 2 assists. Fellow big man William Navarro chipped in 9 points and 15 boards in the victory.

The collective effort made up for the loss of UAAP Finals MVP Thirdy Ravena, who just came off an emotional FIBA World Cup berth-clinching win for Gilas Pilipinas in Kazakhstan.

“It’s a tough game, good game,” said champion coach Tab Baldwin. “Enderun got the jump in the beginning. But our defense kicked in after 1st quarter. Offensively, we don’t ask a lot right now, but Tyler did a good job, Ange pulled some boards and Will Navarro did a good job for our guys. I’m happy that we got the win.”

Valandre Chauca paced the Titans with 27 points, 5 boards, and 3 dimes.

In the second game, Valencia City-San Sebastian made easy work of Chadao-FEU, 75-53.

Fresh off a 28-point eruption against Marinerong Pilipino, spitfire guard RK Ilagan dropped a game-high 22 points and 10 rebounds to help the Stags remain unbeaten in the Foundation Group. His partner-in-crime Allyn Bulanadi, meanwhile, chipped in 16 markers and 9 boards for San Sebastian.

(He’s really matured so much. I said earlier, he and Allyn were the marked men but you saw their patience. I give credit to the guy.)