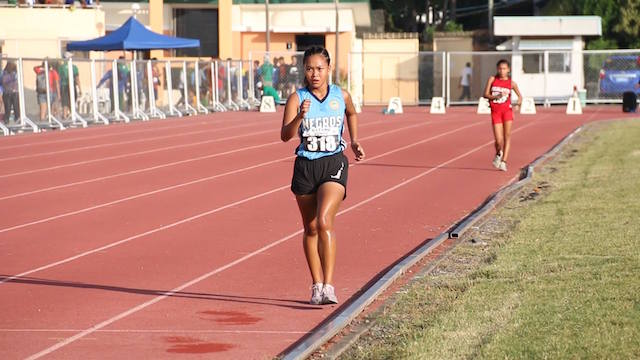 MANILA, Philippines – Elika Salmorin of Negros Occidental ruled the girls’ 2000-meter walk to emerge as the first gold medal winner in the Visayas Leg of the 2019 Philippine National Youth Games-Batang Pinoy at the Iloilo Sports Complex.

Salmorin, 14, bested team mate Rhyza Vaflor of Escalante by clocking 14 minutes and 16.08 seconds to also claim a spot in the National Finals set in October in either Ormoc City or Tagbilaran, Bohol.

“This is for him (Eduardo). Whatever amount I get from here, I will spend it for his medicines,” said Salmorin in Filipino.

Cebu province struck hard in centerpiece athletics thanks to golden efforts by Gio Baguna, who reigned supreme in boys’ discus throw in 36.79m, and Donalita Torres, who ruled the girls high jump in 1.35m.

Over at the pool, Ormoc and Negros Occidental went neck and neck as they harvested 4 golds each.

The 11-year-old Rivilla, an Ormoc Immaculate School Foundation fifth-grader, had a chance to pocket a second gold in the 100m freestyle but lost to eventual winner Troy Castor of Negros Occidental and settled for silver.

Castor checked in at 1:07.94 to deliver one of Negros Occidental’s 4 swim victories.

Iloilo City’s Kristel Rhey Napallatan splashed her way to the 12-under 200m IM gold in 2:49.94 to give tournament host its very first gold.

In baseball, Iloilo City also smashed Dumaguete with a quick, merciless 7-0 win to set in motion its gold medal bid at the La Paz grounds.

The host’s chances increased as only 3 teams entered the event, which will apply a double round-robin format with the best record after it takes the gold. The other team that entered is Carmen, Cebu.

Cebu City, which was tipped to lord over Batang Pinoy after being the best performing local government unit in last year’s Visayas Leg in Dumaguete, had a slow start and had no golds as of posting.

But it made its presence felt in boys’ basketball after it destroyed Dulag, Leyte, 71-23, to set in motion its title bid at the Iloilo Sports Complex Covered Gym. – Rappler.com