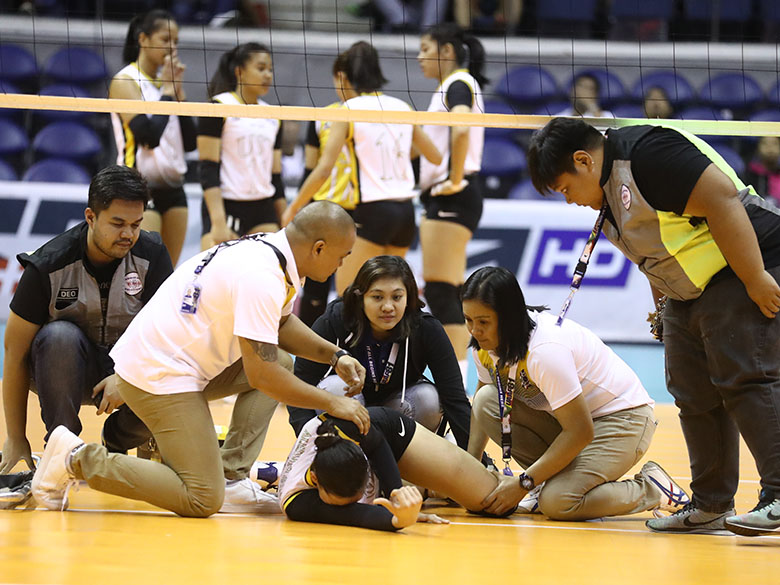 MANILA, Philippines – Just when things seemed to be going smoothly for the University of the Santo Tomas (UST), the Golden Tigresses suffered a big blow in the UAAP women’s volleyball tournament.

Fil-Italian spiker Milena Alessandrini suffered a left knee injury in the 2nd set of the Tigresses’ match against the Far Eastern University (FEU) Lady Tamaraws, which not only resulted to a UST loss but also dampened their early campaign.

With UST holding an 18-17 lead, Alessandrini soared high for a routine spike. But after hitting the ball, the  sophomore hitter landed awkwardly near the net as her left knee buckled.

Alessandrini, one of UST’s leading scorers, remained on the floor for a few minutes and was eventually stretchered off the playing court. She was initially diagnosed with a medial collateral ligament (MCL) injury.

Alessandrini being stretchered off the court after a bad landing that twisted her left knee. #UAAPSeason81Volleyball | @beebeego09 pic.twitter.com/mRHTPkmuhP

Alessandrini was taken to the UST hospital to undergo a magnetic resonance imaging (MRI) scan later on Saturday, March 2.

Last season, the opposite spiker sustained a shoulder injury that saw her miss several first-round games before returning in the second round to notch the Rookie of the Year honors.

Alessandrini’s expected absence in the coming games is a huge blow for a UST side that’s hoping to return to the Final Four this season. – Juro Morilla/Rappler.com