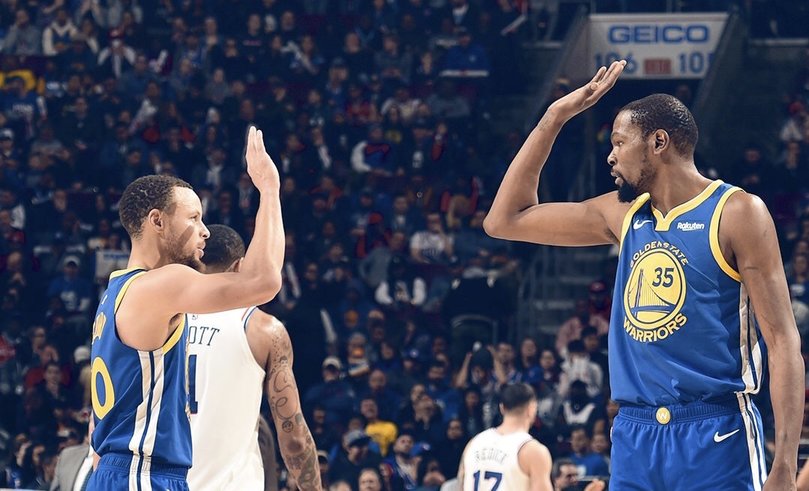 LOS ANGELES, USA – The Golden State Warriors finally got back to winning, but not without another scare.

The defending champions rallied from 14 points down in the 2nd half before holding on in the final seconds to slip past the Philadelphia 76ers, 120-117, in the NBA on Saturday, March 2 (Sunday, March 3, Manila time).

Kevin Durant unloaded 34 points, the last on a free throw with 4.5 seconds left to cushion the Warriors’ lead to 3 after a Ben Simmons split put the Sixers within a bucket, 119-117.

The Sixers still had a chance to tie the game but Durant and Draymond Green put up some good defense on Tobias Harris, who ended up stepping out of bounds before he could launch a potential game-tying three-pointer with 1.7 seconds left.

Steph Curry added 28 points for the Warriors, who came back from 14 points down, 57-71, to rebound from back-to-back heartbreakers against the Miami Heat and the Orlando Magic.

“Both teams are trying to get ready for the playoffs so the intensity was up,” said Durant.

Both squads played minus key stars in the marquee matchup as Sixers center Joel Embiid sat out his fourth game since the All-Stars due to left knee tendinitis while Warriors sniper Klay Thompson got sidelined due to a sore right knee.

DeMarcus Cousins had 25 points and 8 boards for the Warriors, who capped their four-game Eastern road trip still on top of the Western Conference with a 44-19 record.

Curry sank a late tie-breaking jump shot and also added two late free throws and a layup for the Warriors, who wanted to get their March schedule off to a flying start after a stagnant February.

The two-time MVP’s tie-breaking jumper made it 113-111 with 2:35 to go after 76ers backup Mike Scott had hit two free throws to produce the third and final tie of the 4th quarter.

Curry picked up his fourth foul with 8:15 left in the 3rd and sat the rest of the quarter. But with Curry back in the lineup in the fourth, the Warriors thwarted the 76ers comeback bid.

“He took over the game for us,” Durant said of Curry. “We need that from him.”

The Warriors put to waste Simmons’ triple-double effort of 25 points, 15 rebounds and 11 assists as the Sixers also remained at 4th in the East side at 40-23.

Embiid, averaging 27.3 points and 13.5 rebounds in 54 games for the Sixers, said he expects to play again next week.  – With a report from Agence France-Presse