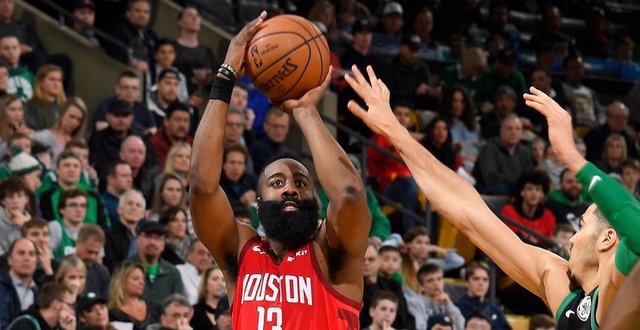 LOS ANGELES, USA – James Harden continued to be the Houston Rockets’ driving force, delivering his 24th 40-point performance while the Boston Celtics fell back into their bad habits.

Harden finished with 42 points, including 6 three-pointers, as the Rockets overcame a Celtics rally for a 115-104 victory in front of 18,600 at the Boston Garden on Sunday, March 3, (Monday, March 4, Philippine time).

The Rockets watched their 28-point lead dwindle to single digits. But they did what they usually do by turning to Harden – the main offensive weapon behind their quest for a favorable seed in the Western Conference playoffs.

“It feels really, really good to kind of have a full roster and catch a rhythm,” Harden said. “This is a perfect time for it.”

The Rockets have now won 5 straight, their longest winning streak since starting a six-game win streak in late December.

Houston ranks 5th place in the Western Conference standings, a game behind the Portland Trail Blazers and Oklahoma City Thunder.

Eric Gordon added 32 points and had 8 three-pointers for the Rockets, who have been trying to maintain consistency despite a constant roster flux because of injuries.

“We’re catching a rhythm,” said Harden. “Throughout the course of the year, we’ve been having a lot of injuries, a lot of ups and downs, but we’re finally catching a rhythm on both ends of the floor, and it feels great.”

“We’re finally healthy, and it feels good. We’re winning. Guys know their roles. We’re executing defensively. We’re helping each other out. We’re talking. That’s what it’s all about.”

Kyrie Irving tallied 24 points, 9 rebounds and 6 assists and Al Horford finished with 19 points for the Celtics, who have lost 5 of their last 6 games.

The struggling Celtics were coming off their first win since the All-Star Game break on Friday over the Washington Wizards.

But any positive feeling was blunted by Sunday’s loss to Houston as the Celtics fell back into their old ways, shooting just 29 % (8-of-28) from three-point range.

It doesn’t get much easier for the Celtics, who play their next 4 games on the road, opening against the two-time defending champion Golden State Warriors on Tuesday.

The one piece of good news is they travel to Staples Center to face the Los Angeles Lakers, who despite having LeBron James are struggling even more than Boston.

The Rockets next face the Toronto Raptors, who fell in overtime to the Detroit Pistons.

Blake Griffin scored 27 points and the Pistons scored the final 10 points in overtime to beat the Raptors, 112-107.

Griffin also had 7 rebounds and Luke Kennard and Reggie Jackson had 19 points apiece for the Pistons, who have won 9 of their last 11 to reach the .500 mark.

Behind 27 PTS from @blakegriffin23, the @DetroitPistons outlast Toronto in OT! #DetroitBasketball pic.twitter.com/M3iIiAPG5R

Kyle Lowry finished with 35 points, 7 rebounds and 5 assists for the Raptors, who decided to rest All-Star Kawhi Leonard and paid for it.

Pistons reserve centre Zaza Pachulia was ejected late in the 3rd quarter for arguing with the officials.

Landry Shamet made seven three-pointers today, the most made by a @LAClippers rookie in a game in franchise history (previous high was six, done three times, by Terry Dehere, Brent Barry, and Eric Gordon).@EliasSports pic.twitter.com/WnWa0w82gL