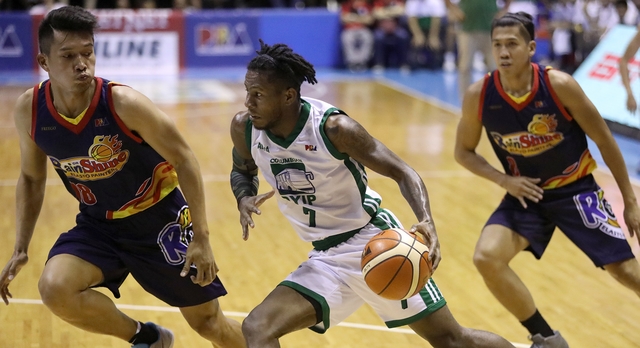 MANILA, Philippines – Rain or Shine still has not broken the Columbian curse.

The Dyip had enough gas left in the tank to reassert their mastery over the Elasto Painters after pulling off an 85-82 win in the 2019 PBA Philippine Cup at the Araneta Coliseum on Wednesday, March 6.

Rashawn McCarthy, CJ Perez and Jackson Corpuz conspired as Columbian defeated Rain or Shine for the fourth straight time dating back to the All-Filipino conference last season to improve to 4-5.

After toppling the Dyip in the first 9 games the two teams met, the Elasto Painters have not won since.

McCarthy delivered 22 points and 5 rebounds, CJ Perez put up 11 points, 11 rebounds and 2 steals while Corpuz chimed in 12 points, 8 rebounds and 3 blocks in the win.

Rain or Shine had plenty of chances to get over the hump against Columbian after Gabe Norwood drilled in a triple, 82-83, but his side failed to score in the final two minutes.

Reden Celda essentially secured the victory for the Dyip by drilling his freebies with 2.3 seconds left as James Yap missed the potential game-tying triple for the Elasto Painters.

Mark Borboran put up 21 points, 4 rebounds and 2 steals but his breakout game of the conference was not enough to prevent Rain or Shine from their second straight loss for a 7-3 record.

Yap finished with 12 points, 7 rebounds and 4 assists, Javee Mocon had 12 points and 9 rebounds while Ed Daquioag chipped in 10 points in the losing effort. – Rappler.com