Perkins proves clutch as Phoenix edges Magnolia to stay No. 1 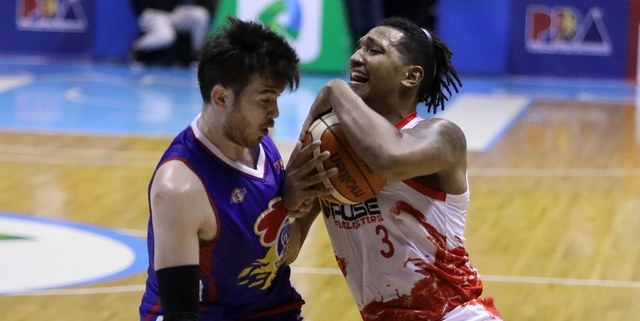 MANILA, Philippines – Jason Perkins drained a clutch triple down the stretch as Phoenix completed a come-from-behind 89-87 win over Magnolia in the 2019 PBA Philippine Cup at the Araneta Coliseum on Wednesday, March 6.

Perkins, the reigning Rookie of the Year, hit a go-ahead three-pointer with 19 seconds left, 88-87, to help the Fuel Masters improve to 8-1 and tighten their grip on the No. 1 ranking.

The Hotshots were primed for their second straight win after Paul Lee converted an and-one play with 33 seconds remaining, 87-86, only to witness Perkins break their hearts by sinking the biggest shot of the game on the other end.

Phoenix then forced a turnover on Lee right after and Perkins split his freebies to make it a two-point lead, 89-87.

With no timeouts left, Magnolia needed to race the whole length of the court to either equalize or take the upper hand but Lee badly muffed his potential game-winning trey at the buzzer.

Calvin Abueva chalked up 24 points, 13 rebounds, 5 assists and 2 steals while RJ Jazul fired 19 points with 3 steals as the Fuel Masters erased a 17-point deficit in the first half.

Matthew Wright made his presence felt in the win with 14 points, 6 assists and 5 rebounds and Perkins finished with 12 points and 7 rebounds – scoring all of his 4 second-half points in the final quarter.

Lee and Mark Barroca each had 16 points for the Hotshots, who failed to sustain their momentum from their win over Meralco on Saturday to fall to 1-4.

Also finishing in twin digits in the loss are Jio Jalalon, who delivered 11 points, 9 assists and 3 steals, and Ian Sangalang and Rome dela Rosa, who chipped in 10 apiece. – Rappler.com