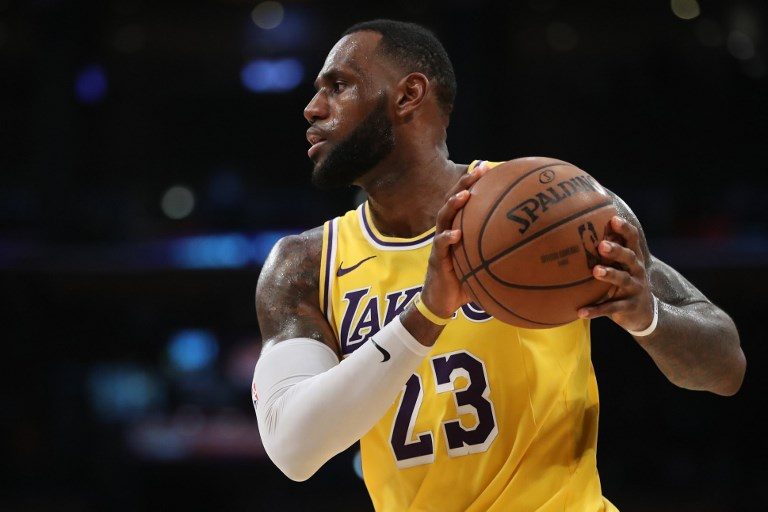 Facebook Twitter Copy URL
Copied
'It's just an honor to have my name be mentioned among all the greats,' says LeBron James after moving past Michael Jordan on the NBA all-time scoring list

The Los Angeles Lakers superstar, who had matched the Chicago Bulls legend’s career total of 32,292 with his first 12 points, made history on the layup with 5:38 remaining in the quarter and sank a free throw to complete a three-point play.

During the next timeout, James went to the bench and buried his head in a towel, appearing to cry while a video tribute played on the scoreboard and he reflected upon the achievement of surpassing his boyhood idol.

“Cant even front,” James tweeted about 90 minutes before tipoff. “This is going to be UNREAL!! Wow man.”

The 34-year-old American forward, the top scorer among active players, made his points in 1,190 games compared to 1,072 for Jordan with the Bulls and Washington.

The next target for James would be retired Lakers star guard Kobe Bryant, who is 3rd on the NBA career list with 33,643 points.

On his current pace, James figures to pass Bryant next season and could overtake Abdul-Jabbar by the end of his Lakers contract in the 2021-22 campaign if he stays healthy.

@KingJames reflects on the milestone!  pic.twitter.com/Te1cxOwZp6

James went 2-of-6 from the floor in the 1st quarter and 0-4 from the free throw line in the opening quarter, but added a lay-in and jumper to match Jordan early in the 2nd quarter and break the record attacking the basket, a trademark move in his career.

James has more assists and 20-point games than any other top 5 scorer.

Jordan and James are often compared as the best players in NBA history.

James wears the same No. 23 worn by Jordan.

“I just take all the accomplishments as they come. It’s just an honor to have my name be mentioned among all the greats.”

Jordan played 15 NBA seasons and was a five-time NBA Most Valuable Player who won 6 NBA crowns in the 1990s with the Bulls.

James, in his 16th NBA campaign, is a four-time NBA Most Valuable Player and three-time NBA champion as well as a 15-time All-Star.

While Jordan went 6-0 in the finals, James is only 3-6 but has reached the past 8 NBA Finals, 4 each with Miami and Cleveland before joining the Lakers last July. – Rappler.com