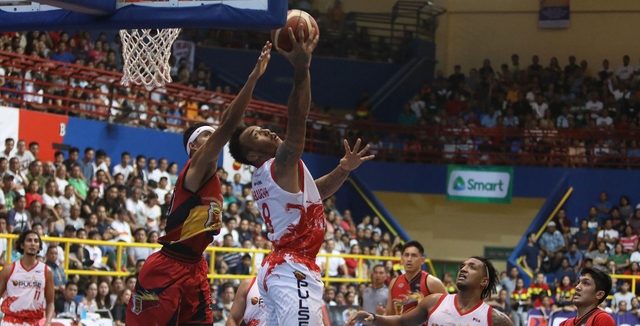 Facebook Twitter Copy URL
Copied
The Fuel Masters head into the quarterfinals as the No. 1 team after ending the Beermen's four-game winning streak

MANILA, Philippines – Phoenix proved it’s no fluke after pulling off a 96-93 escape over reigning four-time champion San Miguel in the 2019 PBA Philippine Cup at the Panabo Multi-Purpose Center in Davao on Saturday, March 16.

Banking on Matthew Wright and Jason Perkins in crunchtime, Phoenix will head into the quarterfinals as the No. 1 team with a 9-2 record and twice-to-beat incentive to boot.

Wright, who finished with 25 points and 6 rebounds, and Perkins, who had 10 markers and 10 boards, scored 3 each in the win-clinching 6-3 spurt as the Fuel Masters ended the Beermen’s four-game winning streak.

It was a tied game with less than two minutes left before Wright drained a big triple with 1:16 minutes left to give Phoenix a 93-90 lead.

Perkins then drilled in a tough fallaway jumper for a five-point Fuel Masters advantage, but Arwind Santos quickly answered with a triple with 31 seconds remaining for the Beermen, 93-95.

An Alex Mallari turnover lifted the San Miguel’s hopes of a comeback only to witness Alex Cabagnot turn the ball over right after as Pekins stretched Phoenix’s lead back to 3 points by splitting his freebies.

With 6 seconds left, the Beermen had enough time to fire a game-tying triple but Terrence Romeo muffed his shot from long range.

Alex Mallari delivered 12 points, 6 rebounds and 6 assists while Justin Chua and Doug Kramer chipped in 9 points apiece and conjoined for 11 rebounds in the win.

June Mar Fajardo was a force inside but his 29-point, 12-rebound and 2-block outing was not enough as San Miguel slipped to 4th place behind a 6-4 record.

Cabagnot had 17 points, 5 rebounds and 2 steals, Arwind Santos chalked up 14 points, 10 rebounds and 4 blocks while Romeo put up 15 points in the losing effort.