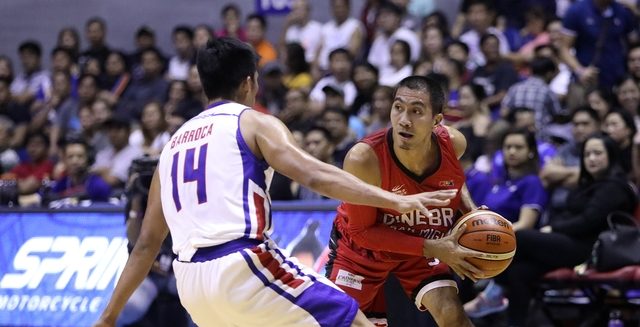 MANILA, Philippines – LA Tenorio’s coronation as the PBA’s Iron Man ended on a high note as Barangay Ginebra eked out a 97-93 overtime win over Magnolia in the 2019 Philippine Cup at the Araneta Coliseum on Sunday, March 17.

Tenorio, who played in his 597th straight PBA game and eclipsed Alvin Patrimonio’s record, had 10 points, 8 assists and 5 rebounds as the Gin Kings remained in contention for a twice-to-beat quarterfinals bonus by improving to 5-3.

But it was not just Tenorio who had the spotlight with Scottie Thompson finishing with a career-high 27 points, 11 rebounds and 5 assists in the win that saw Ginebra get things done in extra period after it wasted a six-point lead late in regulation.

The Gin Kings led 85-79 with barely a minute left but Jio Jalalon waxed hot for the Hotshots and drained back-to-back triples to force overtime.

Jalalon first knocked down a trey from the right corner before sinking another three-pointer off a Mark Barroca block on Sol Mercado to keep his side alive.

However, Magnolia’s gas ran out in overtime as Thompson and Japeth Aguilar swung a 91-90 Ginebra lead to 96-90 with a triple and a fastbreak dunk, respectively.

Jalalon scored all of his 22 points in the final two quarters but even his second-half explosion was not enough as the Hotshots fell to 3-5.

Mark Barroca had 23 points, 7 assists, 5 steals and 3 rebounds while Ian Sangalang chipped in 15 points, 13 rebounds, 7 assists and 2 steals in the loss. – Rappler.com