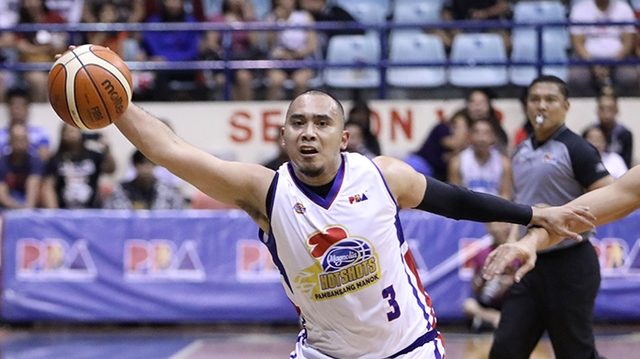 MANILA, Philippines – Not even a bum knee could prevent Paul Lee from propelling Magnolia back to the playoff hunt.

Banged up and all, Lee caught fire for 6 triples en route to a game-high 24 points to power Magnolia to a 103-90 win over NorthPort in the 2019 PBA Philippine Cup on Wednesday, March 20.

With the win, the Hotshots improved to 7th place behind a 4-5 record.

The shifty guard, though, almost did not finish the game as he hobbled back to the bench after hurting his right knee following a collision with Robert Bolick with 7:26 minutes left in the 3rd quarter.

Lee grimaced in pain at the bench, but he ultimately returned with 2:45 minutes remaining in the 3rd and fueled Magnolia’s second-half turnaround by scoring 11 points in the final two quarters.

(We’re always reminded by coach to play through it, that we should always continue playing and hold on to each other.)

The Hotshots’ tight schedule may already be taking a toll on Lee’s body.

Before the win, the Hotshots came off an overtime loss to Barangay Ginebra last Sunday, March 17. Magnolia will then face Blackwater on Friday, March 20, at the Ynares Center in Antipolo City.

It will be the Hotshots’ third game in 6 days, but Lee is not complaining.

(You just have to endure it. You really can’t do anything about the schedule and you can’t complain about it.)

(What you can do is prepare for the next game. I guess that’s just how you should look at things.) – Rappler.com