Kyrie Irving: ‘Anything can happen on the road’ 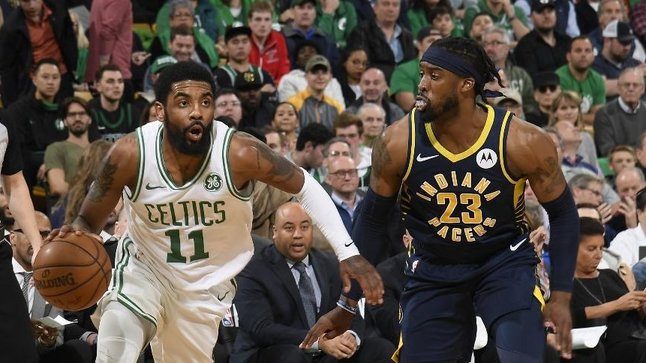 LOS ANGELES, USA – Kyrie Irving warned his Boston teammates against complacency over the remainder of the series after the Celtics grabbed a 2-0 lead over the Indiana Pacers in the NBA Eastern Conference first-round playoffs.

“Tonight gives us confidence but anything can happen on the road,” Irving said after leading a late Boston fightback in a dramatic win over Indiana on Wednesday, April 17 (Thursday, April 18, Manila time).

“We’ve got to go to Indiana, a tough place to play, and be ready for whatever. It’s going to be a war out there. We understand the type of team we’re playing against. It’s a series for a reason.”

The 27-year-old point guard said the Celtics’ never-say-die approach had helped them transform Wednesday’s game into a win despite trailing in double-figures in the closing quarter.

“It’s just staying resilient, understanding that we’re never out of this game,” Irving said. “It’s the playoffs, anything can happen.

“I tell the guys all the time, we’ve got to stay communicative and do the little things in order to get the win.”

Irving scored 37 points and led a fourth-quarter Celtics comeback to defeat the Pacers, 99-91.

The Pacers appeared to be closing in on a series-leveling victory after taking an 11-point lead heading into the 4th quarter.

But some superb shotmaking from Irving and a 26-point display from Jayson Tatum helped Boston outscore the Pacers by 31-12 in the final quarter to seal a roller-coaster win at the TD Garden.

The win puts the Celtics firmly in control of the best-of-seven series as the two sides head to Indianapolis for Game 3 on Friday. – Rappler.com