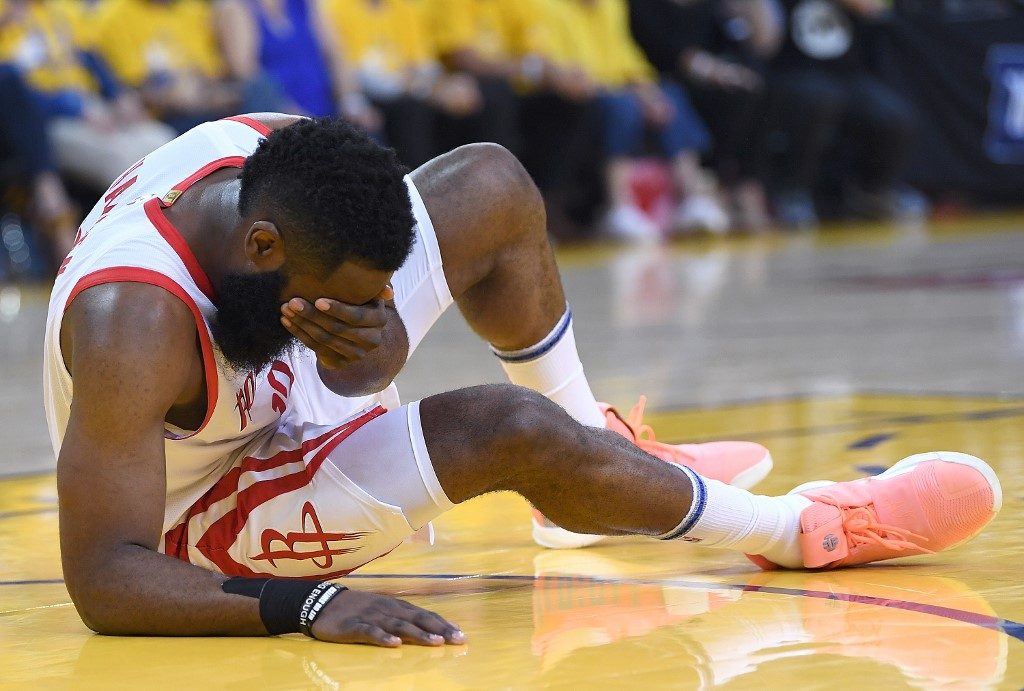 Facebook Twitter Copy URL
Copied
'I didn't have a doubt he was coming back unless it was something catastrophic,' Rockets coach Mike D'Antoni says of James Harden

SAN FRANCISCO, USA – Houston star James Harden, who suffered a lacerated left eyelid in the Rockets’ NBA playoff loss to the Golden State Warriors on Tuesday, April 30 (Wednesday, May 1, Manila time) is hoping 3 days of rest will have him seeing clearly for their next encounter.

“It’s pretty blurry right now,” said Harden, who was swiped in the face by the Warriors’ Draymond Green as they battled for a rebound in the 1st quarter of Golden State’s 115-109 victory.

“Hopefully it gets better day by day,” added Harden, whose Rockets host Game 3 of the best-of-seven second-round Western Conference series on Saturday aiming to start digging out of a 0-2 hole.

Harden returned after receiving treatment – including drops to numb pain in his eyes – and led the Rockets with 29 points.

But despite the drops, he could be seen squinting and grimacing in the bright lights.

“He got raked pretty good in the eyes,” Rockets coach Mike D’Antoni said. “But that’s him – I didn’t have a doubt he was coming back unless it was something catastrophic.”

It certainly looked bad enough as Harden dropped to the court and stayed there – a hand to his eyes – until the Rockets called a timeout so he could get medical treatment.

Green spoke to Harden as he departed the court with a compress on his face.

Green said he just wanted to check on Harden after the inadvertent contact.

“It’s not about hurting anyone out here,” Green said. “A lot of people forget when a guy has an injury you live that every second of every day and it’s not just about this game. So if his eye is messed up, he’s got to live that every day, so I wanted to check on the guy.” – Rappler.com