Ancajas to weigh at least 128 on fight vs Funai 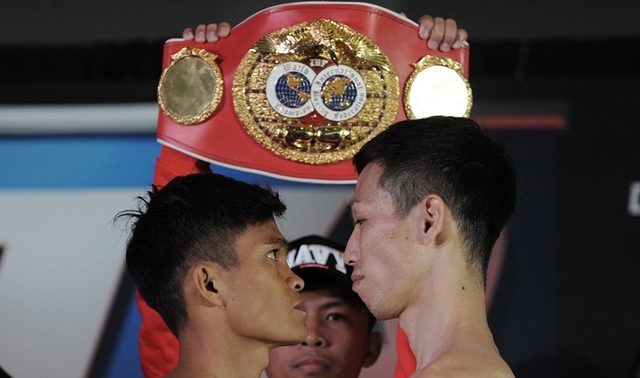 Ancajas checked in at 114.2 pounds, while Funai came in at 114.4 pounds – both well under the division’s limit during the official weigh-in held on Friday, May 3 (Saturday, May 4, Philippine time) at the Stockton Arena, also the fight venue.

Having met the 115-pound ceiling Thursday night and waking up Friday at 114.6 pounds, Ancajas confidently stepped in the weighing scale and was mildly surprised when he found out that his weight dipped a bit.

Right after his weigh-in, chief trainer Joven Jimenez led Ancajas to a table-enclosed area where free tacos and chicken cuts were available – not for Ancajas’ consumption, of course.

Nutritionist-dietitian Jeaneth Aro brought along spaghetti, which Ancajas gobbled up with gusto, washing it down with an energy drink laced with herbs as his rehydration begins heading to the title duel.

Aro also prepared a peanut butter sandwich with banana on the side, but Ancajas said he’d just eat them on the 15-minute drive to Team Ancajas’ rented house at Sonata Circle here.

According to Aro, she’ll feed Ancajas gradually every hour until dinner with food loaded with protein and carbohydrates, accompanied by supplemental drinks for him to attain maximum results in the refueling process.

Jimenez wants Ancajas to be between 128 to 130 pounds when he dangles his title for the 7th time, 4th straight in the United States.

Against Mexican Alejandro Santiago Barrios, who held him to a split draw in September 2018, Ancajas bared he was 128 on fight night. When he beat Japanese Teiru Kinoshita in Brisbane in 2017, Ancajas said he checked in at 130.

Taking into consideration Ancajas’ taste buds, Aro said Ancajas will have chicken tinola for lunch and will have a meal 3 hours before the 12-rounder with Funai.

Ancajas said he was satisfied with his weight and conditioning.

“I’m okay. I got the weight earlier and easier because it was programmed and monitored,” Ancajas said in Filipino. – Rappler.com