How does June Mar Fajardo keep his championship hunger? 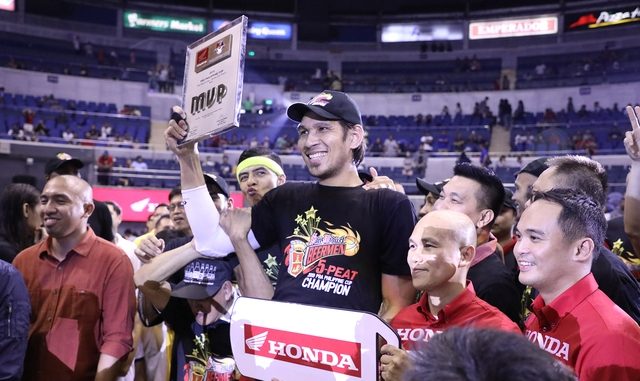 MANILA, Philippines – June Mar Fajardo may be the most successful PBA player of his generation, but the San Miguel stalwart approaches the game as if he has a lot more to prove.

The Cebuano giant just added two glitzy trophies to his ever-growing collection – another championship after leading San Miguel to a historic fifth straight Philippine Cup title and the Finals MVP award to boot.

So how does the reigning five-time MVP, eight-time Best Player of the Conference winner and seven-time champion keep his eyes on the prize? His answer: By simply staying grounded.

(All the awards I’ve won, I cherish them and I keep them in my heart but I don’t let them get into my head.)

Fajardo even ended the All-Filipino conference carving his place in PBA history by breaking the league’s longest-standing record in a gripping 72-71 win over Magnolia in the winner-take-all Game 7 on Wednesday, May 15.

He cleaned the glass for a whopping 31 boards to shatter the former all-time mark of 29 set by Marcelo Simbulan in the inaugural 1975 season for most rebounds in a single game by a local.

But even after his latest feat, Fajardo downplayed it to simply doing his role.

(I just wanted to get all the rebounds. I didn’t want to waste the opportunity because I couldn’t bring it back. When will we have a chance to win 5 straight championships? So I told myself this is the time.)

(We were in the position to win the game, so we pushed ourselves to the limit. Fortunately, we were able to win. My main job is to get the rebounds, and luckily, I got them.)

Marvelling at how his career turned out, Fajardo paid tribute to the Beermen.

(I’m thankful that I’m a part of this and this organization. I’m really blessed. I didn’t expect that I would come to this point.) – Rappler.com