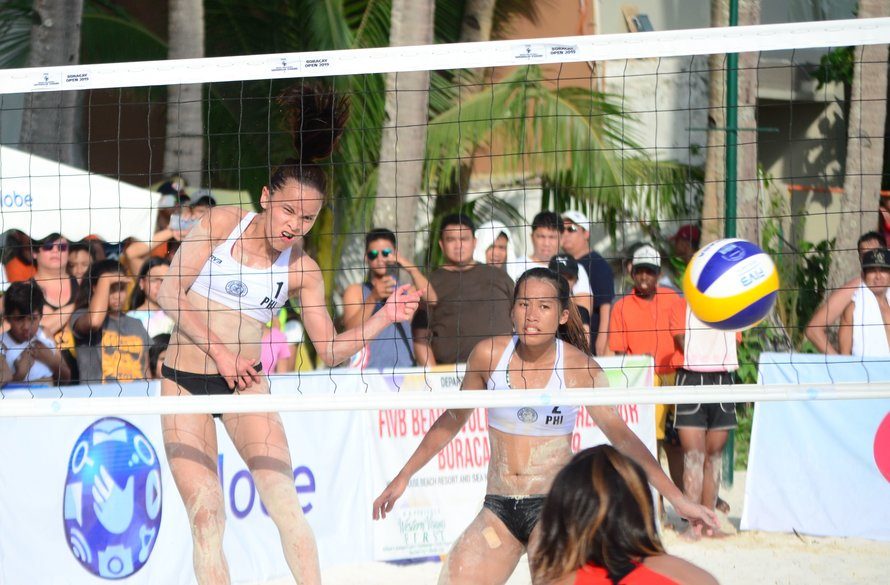 BORACAY, Philippines – Sisi Rondina and Bernadeth Pons left everything on the sand court before bowing to Japan’s Sakurako Fujii and Minori Kumada, 17-21, 19-21, in the quarterfinals, ending the Philippines’ campaign in the FIVB Beach Volleyball World Tour Boracay Open presented by Globe Saturday, May 25, at the White House Beach Station 1 here.

The country matched its best Beach World Tour finish of 5th place in the Manila Open one-star last year with Rondina and Dzi Gervacio. Incidentally, Sakurako was also the one who eliminated Rondina and Gervacio with Shinako Tanaka.

(We’re still grateful that we competed against them. We gained experience.)

Rondina and Pons finished with two victories, pulling off a dominant 21-18, 21-6 win over Ekaterina Filina and Ekaterina Zazhigina of Russia to clinch  a spot in the quarterfinals after losing to Japan’s Satono Ishitsubo and Asami Shiba, 16-21, 19-21, earlier in the day.

(We kept up with them. We didn’t get routed. Everyone saw that we had a shot. We really need longer preparation and more exposure in international tournaments.)

Sakurako and Minori, who have paired in 6 events this year, were really pushed to the limit against Rondina and Pons, the highly popular Filipina pair who reunited in the four-day tournament organized by the Beach Volleyball Republic.

“Rondina was tough,” said Sakurako. “She improved her defense. I remember last year, she was good in digging. She also improved in receiving.”

(It’s an honor to be praised by a Japanese player. Japan’s beach volleyball is at a different level. It’s an honor that Japan appreciated our game.)

The Japanese were still able to progress to Sunday’s semifinals despite the loud cheers for the Rondina-Pons tandem by the home crowd.

“Everybody was cheering for the Philippines. But we just focused in our game,” said Sakurako.

Rondina and Pons wound up as the last Filipina team standing after Bea Tan and Dij Rodriguez bowed to reigning two-time Asian U21 champions Pawarun Chanthawichai and Thatsarida Singchuea of Thailand, 12-21, 12-21, in the other Round of 12 duel.

Playing like a well-oiled machine, Tan and Rodriguez cruised to a 21-7, 21-15 win over Malaysia’s Tan Hsi Yan and Tasha Mae in the morning session to give the Philippines another slot in the Round of 12.

Jackie Estoquia and DM Demontaño dropped a heartbreaking 14-21, 21-19, 13-15 loss to Filina and Zazhigina in the final pool match that eliminated the Iloilo tandem.

Leaving behind a heartbreaking 21-17, 13-21, 14-16 loss to Singapore’s Eliza Chong and Lau Ee Shan in last Friday’s opener, Tan and Rodriguez were in the zone on both ends of the sand court to send the Malaysians packing, while keeping the three-time Beach Volleyball Republic On Tour champions in the competition.

Rondina and Pons went toe to toe with world No. 86 Ishitsubo and Shiba in both sets, but the Japanese were simply too classy to remain undefeated.

Rondina and Pons opened their campaign with a 21-14, 21-8 conference of Japan’s Shinako Tanaka and Miyuki Matsumura Friday.