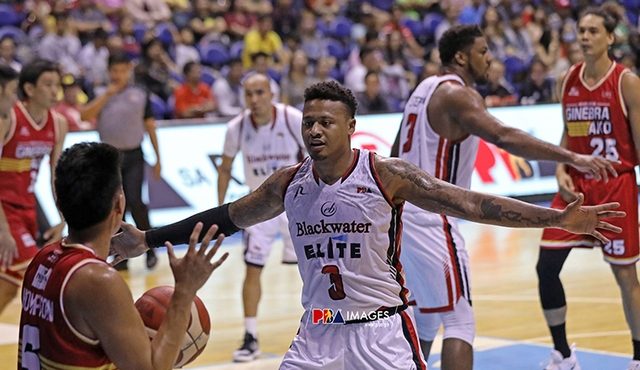 Facebook Twitter Copy URL
Copied
Mired at the bottom last conference, the Elite get off to a hot start for a surprise early lead in the Commissioner's Cup

MANILA, Philippines – Contender and not a pretender.

Ray Parks said Blackwater is “for real” after it hacked out a 118-110 win over Columbian to remain undefeated in the 2019 PBA Commissioner’s Cup on Sunday, May 26.

“We’re for real. That’s one thing I can say, we’re for real. It just goes to show the hard work that we put in,” said Parks, who poured in 23 points, 5 rebounds, 5 assists, and 2 steals in the triumph.

Considering the Elite finished the Philippine Cup at the bottom of the standings with only two victories, it was surprising that they hold an early lead in the standings at 3-0.

Moreover, the teams they previously defeated are touted to reach the playoffs.

Blackwater opened its campaign with an overtime win over Meralco before slaying a giant in defending champion Barangay Ginebra in another overtime triumph.

“It’s a different type of Blackwater right now, and my thing is, these games, they’re no fluke,” Parks said. “We took teams down to the wire, it just happens the breaks of the game, they came our way. Those are great teams.”

“It’s a testament to the hard work, all the way from the coaches, to the ball boys, to us, to the management, and we’re just reaping the benefits right now.”

A big part of the Elite’s early success is Parks, who is averaging 23.7 points, 5.3 rebounds, 3.0 assists, and 2.3 steals, and has embraced the task of guarding the opposing best player.

But Parks reiterated the team is more than just him.

“[A]t the end of the day, my thing is, I just want to lead my team to a win. It ain’t really about one person,” he said.

Blackwater shoots for a fourth straight win against All-Filipino semifinalist Phoenix at the Mall of Asia Arena on Friday, May 31. – Rappler.com