[OPINION] Winning and losing with grace Facebook Twitter Copy URL
Copied
'We have lost with grace, and though painful that is part of one’s education. We have to accept the pain, and grieve for healing takes a little time' 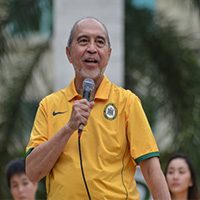 Sports is all about passion.  Its thrill is the game won, or the last-minute loss. While what we may see play out on the court, for example, is the science, strategy and tactics of volleyball as athletes execute the well-crafted game plans of the coaches, the excerpts from entries in this journal provide a different perspective on the game. There is another side to sports that is less discussed but probably more important: the building of character.

The excerpts from this diary bring together some insights from the sidelines, following one team throughout the UAAP Season 81.  Accompanying the feisty Lady Tamaraws of the FEU women’s volleyball team and working quietly with the coaches, I put together a running commentary after every game, looking back on the day’s efforts and preparing them mentally for the next.  In a way these entries represent some kind of “view from the dugout.”  From the 20-page diary, I have selected just two entries: the two playoff games against the current champions, the Ateneo Lady Eagles:

In the first playoff game, the Lady Tamaraws played against the Lady Eagles with the twice-to-beat advantage, and this is what I wrote on 6 May 2019:

“Confidence, composure, companionship were the elements on display in our character-defining game.  Steel of nerves and fierce determination showed in the clutch as our team came back every time we seemed on the verge of being counted out.

“Ateneo is a formidable side that compiled a spectacular 12-2 won-lost record sweeping us twice in the regular rounds.  But now the playing field is even, and to finish the job we need all the fortitude and determination we can muster in the next do-or-die game.

“The endgame consists of many moments, and we have rediscovered a number of key learnings this season:

There is now no turning back; we have turned our season around, and there is no way to go but forward.” In the second game of the playoff for the finals, Ateneo prevailed and the FEU team’s improbable journey ended as I wrote on 9 May:

“You tried your best, but on the night our best was not good enough and we bowed to a better team.

“When all is said and done, we are grateful for this season’s blessings:  We will remember our teammates and the moments that we will all treasure.  Thus, thanks are in order for the blessings we all received in the season past, and our special gratitude to our three graduating seniors.  And, to the rest of the team, thanks for showing heart even when the pundits had consigned you to the bottom half of the league even before the season had started:

“Though losing with grace is part of one’s education, acknowledging the pain and moving on is our continuing challenge: So what is to be done?  We have lost with grace, and though painful that is part of one’s education.  We have to accept the pain, and grieve for healing takes a little time.  But moving on is the real challenge.  For the graduating seniors, the ranks of the pros beckon and we wish you Godspeed.  For the rest, we have a new season to prepare for; and, after some rest, work begins to improve anew.  You will have new teammates, and relationships to build, team chemistry to work on, and to listen and learn from your coaches and peers in what ways you can be better players and better persons.

“In sports as in life, it is character that counts in the end:  and so, at the end of the day, volleyball glory is as elusive as any worthwhile endeavor.  We tried but were found wanting.  But, rest assured that we know deep in our hearts that we never gave up till the last whistle blew.  We rose to the occasion when called for, and we did so with courage, with grit, with determination.  We never lost hope, though the noise from the entire arena seemed to drown out our dreams.

“In the end, it is character that counts in both the playing court and in life.  If each of us can claim at the end that we have built character over the stretch of this season, then in our eyes you are truly champions.”  – Rappler.com

Ed Garcia is a consultant on the formation of scholar-athletes at the FEU.  He was a framer of the 1987 Constitution, worked at Amnesty International and International Alert in the UK for over two decades, and also taught at the Ateneo and UP.