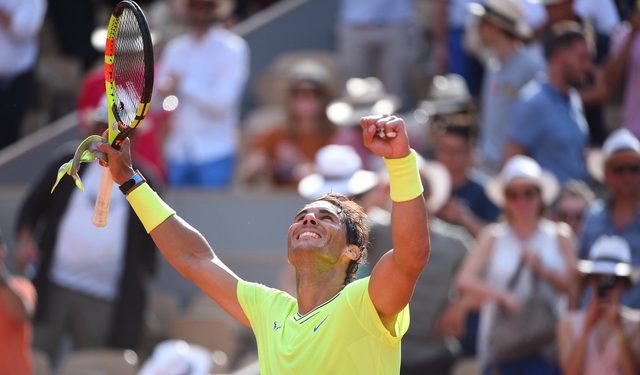 PARIS, France – Rafael Nadal racked up his 90th French Open win and admitted he would have considered it “impossible” if he was told as a teenage debutant in 2005 that he would still be breaking records in Paris into his 30s.

The 11-time champion stormed into the quarterfinals for the 13th time by sweeping past Argentina’s Juan Ignacio Londero 6-2, 6-3, 6-3 on Sunday, June 2 (Monday, June 3, Philippine time).

On Monday, he will celebrate his 33rd birthday as he plots a way past either Japan’s Kei Nishikori or Benoit Paire of France in what will be his 38th career Slam quarterfinal.

“Obviously when I was 18, thinking that I could still be here at the age of 33, it was probably something incredible and impossible to think about,” said Nadal.

“Some people thought that I would finish my career earlier.”

“Luckily, despite all the problems I had, the most positive thing is that I managed to maintain the desire and the pleasure.”

“But even when you had a low moment, I always found the motivation to continue. People kept saying I would have a very short career because of the way I play. Luckily, they were wrong.”

He has lost just two matches in that time – to Robin Soderling in the 2009 last 16 and Novak Djokovic in the 2015 quarterfinals.

Nadal’s 90 wins at Roland Garros are just 8 short of the record held by Jimmy Connors at the US Open.

Roger Federer has 97 at the Australian Open and 95 at Wimbledon.

Londero, the world No. 78, never looked like becoming the third man to achieve the feat of defeating Nadal on Paris clay.

“He hits inside forehands that are totally incredible, extraordinary,” said the Argentine.

“He is in extraordinary physical shape. He runs after every ball, returns every ball. Many other players would not have returned some of my shots.”

Nadal has a 10-2 record over Nishikori while he has yet to lose to Paire in 4 matches.

He will be pondering those sort of statistics and not how to celebrate his 33rd birthday.

“Tomorrow what can I do? Just celebrate here a little bit with the people from the tournament, all the workers there that, being honest, for me, they are so special, because I always had an amazing relationship with all of them.”

“And then have a small dinner. But I play the next day, so it will not be a big thing.”