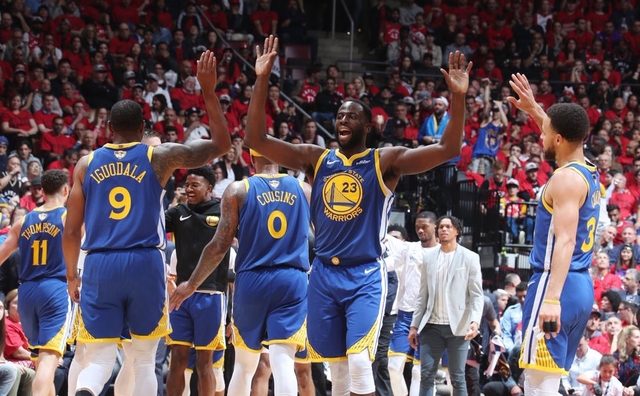 MANILA, Philippines – The Golden State Warriors came roaring back to level the 2019 NBA Finals with a 109-104 road win over the Toronto Raptors in Game 2 on Sunday, June 2 (Monday, June 3, Philippine time).

Golden State silenced the usually raucous Scotiabank Arena in Ontario as it went on a third-quarter tear to turn back Toronto, which clinched the series opener convincingly in a 118-109 triumph.

Down 54-59 heading into the halftime break, the Warriors erected a blistering 18-0 run to mount a 13-point lead and never relinquished their hold of the upper hand to frustrate the determined Raptors seeking a 2-0 series lead.

Toronto managed to inch 2 points, 104-106, with less than 30 seconds left off a Danny Green triple, but Andre Iguodala saved Golden State with a trey of his own with 7 ticks remaining.

Andre Iguodala extends the lead and the @warriors hold on to even the series 1-1! #NBAFinals

Klay Thompson kept the Warriors afloat with 25 points, 5 rebounds, and 5 assists before leaving for the locker room midway through the final frame due to a left hamstring tightness following an awkward shot landing.

Steph Curry also showed up, bucking off a field goal-less opening quarter to finish with 23 points, 4 rebounds, and 3 steals as he knocked down crucial three-pointers in key stretches of the match.

“We did a great job physically, way better than the first game,” said Cousins. “We’ve still got to correct some mistakes but a solid effort all around.”

Kawhi Leonard paced the Raptors with 34 points and 14 rebounds, while Fred VanVleet added 17 points and 3 steals off the bench.

Victory was vital for Golden State 34 teams that fell behind 0-2 in the NBA Finals, only 4 rallied to win the crown.

The Warriors have now won at least once on the road in 23 consecutive playoff series.

Kyle Lowry and Green buried three-pointers to pull the Raptors, in the first finals of their 24-season history, from a 13-point deficit to within 92-88 early in the payoff period.

But Quinn Cook answered with back-to-back treys to ignite a 14-6 Golden State run that stretched the Warriors’ lead to 106-94 with 5:39 to play.

Toronto trimmed it to 106-98 and Curry received a technical foul for an errant ball throw that set up 3 Leonard free throws, pulling the Raptors within 106-101 with 1:08 minutes remaining.

Green then sank another triple as the Raptors got within two with 26 seconds remaining, but Iguoadala answered for the cold-shooting Warriors with a clutch three-pointer that settled the score.

Early on, VanVleet had a back-to-back three-pointers and three-point play, while Leonard added 5 points in a 20-7 Toronto run for its biggest lead at 47-35.

But Curry, who missed his first 6 shots, scored 15 of the Warriors’ last 17 second-quarter points and Golden State trimmed the halftime deficit to just 5 points.

Golden State was again without top scorer Kevin Durant, but the forward is expected back soon after missing 7 games with a right calf strain.

Curry’s run of 6 consecutive NBA playoff game with 30 or more points ended two shy of the record set by LeBron James against the Warriors in 2017.

Green, meanwhile, fell short of matching the NBA playoff record of consecutive triple doubles and matching Wilt Chamberlain and Magic Johnson as the only players with back-to-back triple doubles in the NBA Finals.

Raptors rap-singer superfan Drake and former US President Barack Obama were among celebrities in attendance. – Rappler.com