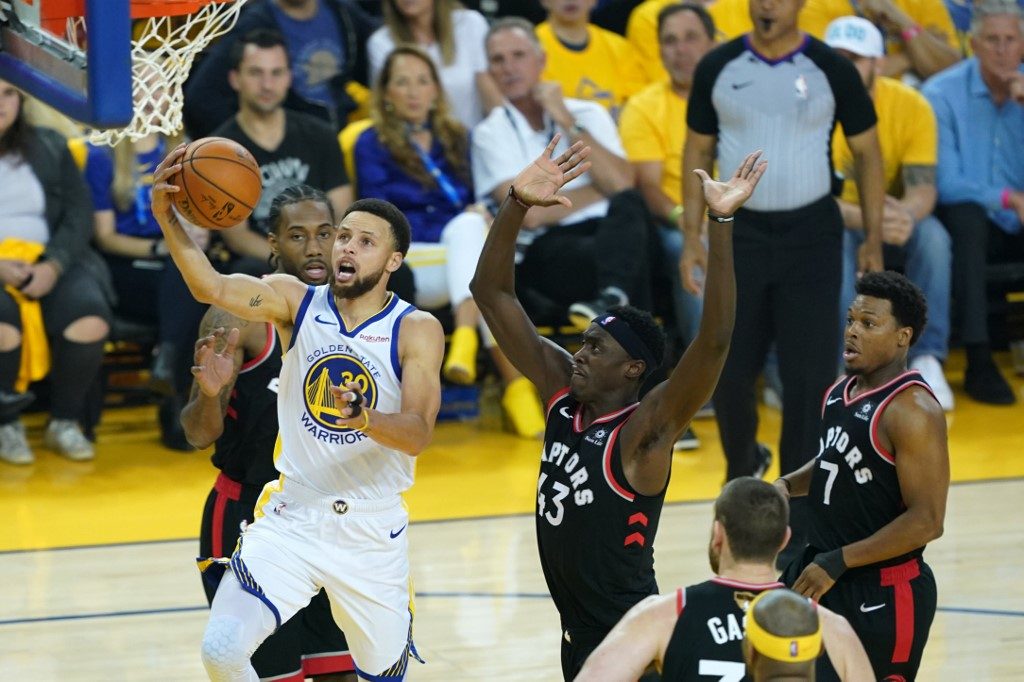 Facebook Twitter Copy URL
Copied
'We're going to fight again. I don't really see us losing too many more, though,' says Steph Curry after erupting for a playoff career-high 47 points in a losing cause

OAKLAND, USA – Stephen Curry knew he needed a big night for the Golden State Warriors to have a chance with two star players injured, so he unleashed the best playoff game of his NBA career.

Curry scored a playoff career-high 47 points and added 8 rebounds and 7 assists in a losing cause as the Toronto Raptors beat Golden State 123-109 to seize a 2-1 lead in the best-of-seven NBA Finals.

“From the start I feel like I could get to where I wanted to go on the floor. It’s just a matter if you make or miss or make the right play  distributing the basketball,” Curry said.

“Just got to be aggressive like I’ve been, try to make the right play, and we live with the shots that I take.”

The Warriors were without star guard Klay Thompson, benched with a left hamstring strain in a game-time decision, and Kevin Durant, who has missed a month with a right calf injury. Together they average more than 50 points a game in the playoffs.

“I liked the competitiveness that we had, understanding that we’re missing 50 points pretty much between KD and Klay,” Curry said. “So we’ll adjust. And it’s a long series you know. It’s going to be fun for us.”

“We got to keep that same mentality and just play a full 48 like we’re accustomed to doing,” Curry said.

“We fought, but we lost. So we got to go back to the drawing board and just recalibrate for game four. We’re going to compete no matter what happens, you can count on that.

“Got to execute and play smarter and no matter who is out there on the floor, do what you got to do to win.”

Curry, whose prior playoff high was 44 points against San Antonio in 2013, produced the eighth-highest scoring effort in NBA Finals history.

The only higher total since 2001 was LeBron James scoring 51 for Cleveland last year, also in a losing cause.

“He was amazing,” Warriors forward Draymond Green said of Curry. “Tonight was a special performance for him and he definitely does stuff that I don’t think we have ever seen anyone ever do and we probably won’t see anyone ever do it again.

“If I played better with the night that he had, we would have won.”

‘Got to roll with it’

“We didn’t go into this game thinking we’re not going to play Klay or Kevin or anybody else and we’re just going to give this game away,” Green said. “You don’t sacrifice a finals game to be healthy for the next one, because anything can happen.

“But at the same time you do have to be smart. We would much rather have Klay for the rest of the series than putting him out there and losing him and then nothing.”

Thompson, who missed his first career playoff game after 120 in a row, will have two rest days before Game 4 Friday. Durant is progressing but his return is uncertain.

“It’s more difficult than with them,” Green said. “But nonetheless we got guys that can step up, and we just didn’t play well enough.”

“It’s always going to be challenging. We can sit and talk about the injuries until we’re blue in the face, it’s not going to change how Kevin’s calf feels. And it ain’t going to make Klay’s hamstring feel better either.

“We got to roll with it. We lost. We’re going to fight again. I don’t really see us losing too many more, though.” – Rappler.com