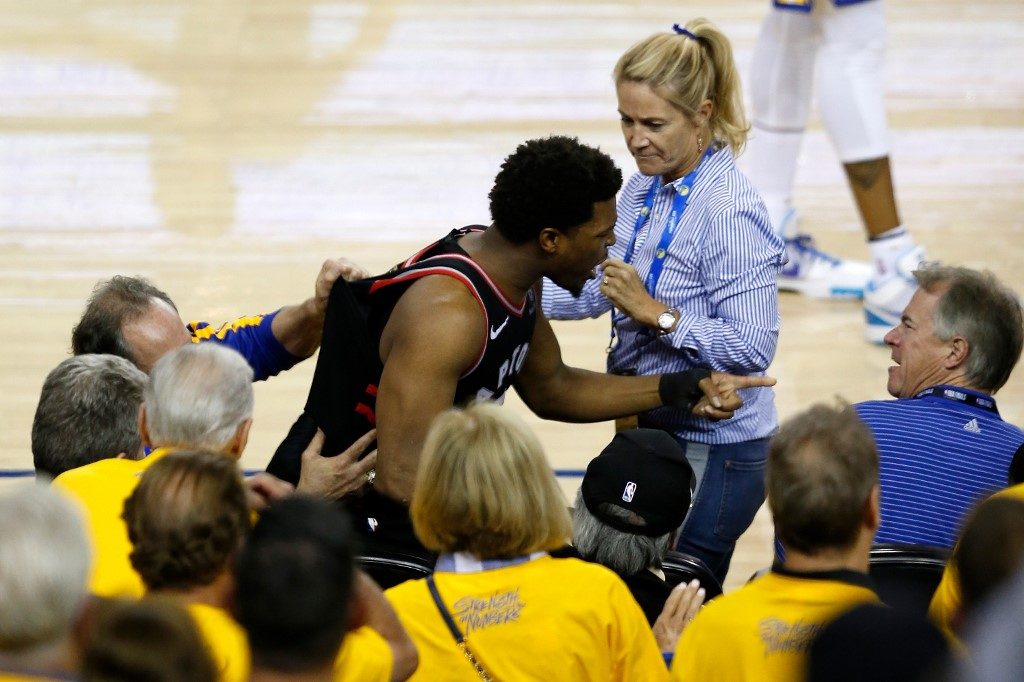 But the punishment doesn’t go as far as Lowry wants, the Raptors playmaker saying he wants Stevens out of the league for his actions in Toronto’s 123-109 Game 3 victory Wednesday.

“A guy like that shouldn’t be part of our league,” Lowry said.(WATCH: Lowry gets shoved by fan, pushes Raptors to Game 3 win)

The NBA and club bans were immediate and will last through the 2019-2020 playoffs, a league statement said.

Lowry scored 23 points as Toronto seized a 2-1 lead in the series, but it was when he dove after a loose ball on the sideline in the 4th quarter that sparked the incident.

After Lowry tumbled into the courtside seats, he was shoved and cursed at by Stevens, a Silicon Valley venture capitalist sitting in an adjacent seat. Lowry complained to a referee and Stevens was eventually removed.

The NBA issued a statement calling Stevens’ moves “beyond unacceptable” and banned him from NBA games.

The Warriors issued an apology from the club and Stevens, saying they were “extremely disappointed” in his behavior and that he was prohibited from returning to NBA Finals games.

“I think more should be done,” Lowry said. “He’s not a good look for the ownership group they have.

“A guy like that showing his true class, he shouldn’t be part of our league. There’s just no place for that.”

The league has forced out owners before, notably former Los Angeles Clippers owner Donald Sterling after racist remarks were made public in 2014. He was banned from the NBA for life and the club was sold to Steve Ballmer.

Lowry had no idea his aggressive fan was an NBA part-owner.

“I didn’t know it would be as big of a deal as him being a part of the group that writes the checks,” Lowry said. “Unbelievable. Even worse. Even worse. He should understand this is what happens.”

Lowry thanked Warriors players and LeBron James, who all praised Lowry for his composure in handling the incident when he could have responded with force and cursing himself.

“In that situation, I don’t think I could have handled it any better,” Lowry said. “I’m glad I did what I did and I understand that things could have been a lot different if I reacted a different way or put my hands on him or did anything of that nature.

“I was furious. I’m not going to lie. I was pretty upset.”

Lowry said he kept his composure by thinking of others after asserting that Stevens had sworn at him several times.

“I hold myself to a high, high standard. And I have to make sure that I uphold that. That’s a big thing for me. Never letting guys like him get under your skin because that’s bull crap.”

Lowry said it might be a situation where a team “owner” saw a player as just another “asset” in an investment.

“Not all of them. But certain ones, yes,” Lowry said. “Mark Stevens makes me feel like he’s one of those guys.”

“Fans are coming out watching the game, they feel like they’re on the team. They’re competitive as well, probably a little bit under the influence, and things like that happen,” Leonard said.

“This isn’t the first time we have seen something like that. We have to do a better job, the NBA, just of making sure these fans don’t come in and think they can just touch guys and hit them.”

Stevens bought into the Warriors in 2013, purchasing the stake in the team that had belonged to Vivek Ranadive, the NBA’s first India-heritage owner, when he bought the rival Sacramento Kings. – Rappler.com