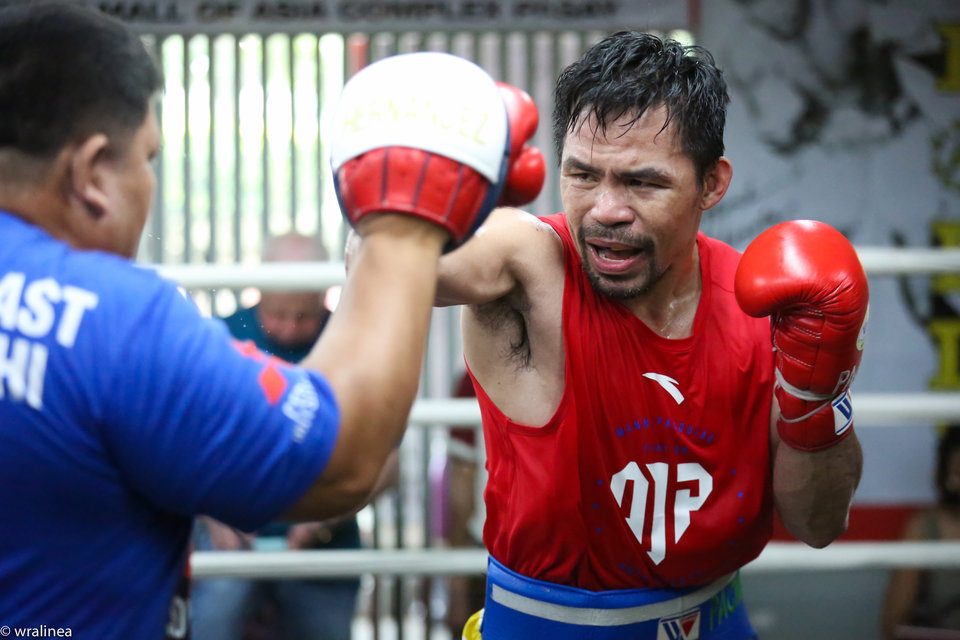 MANILA, Philippines – Philippine boxing legend Manny Pacquiao has vowed to silence Keith Thurman at their World Boxing Association title bout next month, calling him a “loudmouth” as their war of words escalates.

The run-up to the fight has been full of flying insults, with Thurman saying he will beat the 40-year-old Pacquiao into retirement when they clash in Las Vegas on July 20.

Thurman, 30, said last month he would “crucify” the world’s only eight-division world champion, who the undefeated American said has “never fought anyone this young, strong and hungry.”

“He’s a loudmouth outside the ring. Let’s see if he can back it up inside the ring,” Pacquiao said Thursday as he trained in Manila.

“Some boxers are arrogant while other boxers are humble. Thurman? We know he’s arrogant,” added Pacquiao, the WBA’s secondary “world” champion.

“I’m so motivated for this training camp because of his trash talk, like that. I would rather have my fists do the talking,” Pacquiao said.

The Philippine legend’s career seemed headed for its final moments last year, but he has since knocked out Lucas Matthysse and beat Adrien Broner in bouts.

Pacquiao plans to split his training camp between the Philippines and Los Angeles, wrapping up his preparations under the watchful eye of longtime trainer Freddie Roach, who is back in his corner.

He told reporters he will fly to Los Angeles on June 15. (READ: Penciled to lose, Manny Pacquiao relishes underdog role)

Thurman, who is 29-0 with 22 knockouts, has promised to be Pacquiao’s final opponent in the ring.

“His legacy ends on July 20. He’s had a wonderful career, and been an inspiration. We all love him and respect him. And I’m respectfully going to kick the shit out of him.”

But Pacquiao pointed out, after working the heavy bag on Thursday, that Thurman would not be the first younger challenger he has beaten.

“My last fight was (Adrien) Broner and he was only 29 years old. That’s not a problem,” he said Thursday.

Pacquiao, who is a member of the Philippines’ upper house Senate, said he plans to fly back to Manila immediately after the Thurman fight to attend the annual address of his ally, President Rodrigo Duterte. – Rappler.com