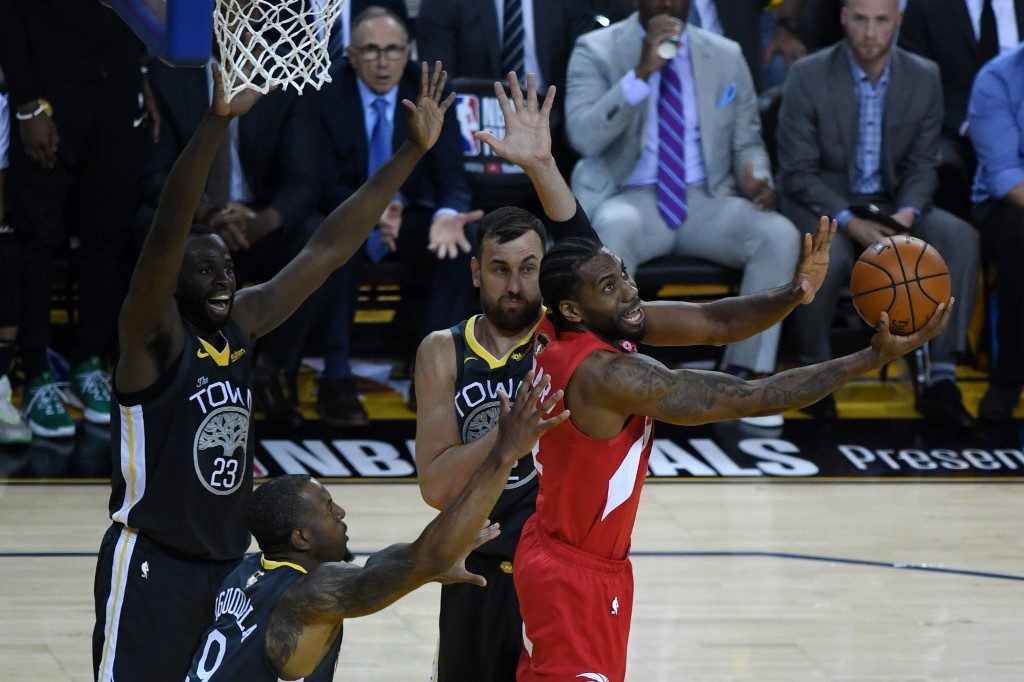 OAKLAND, USA – The Toronto Raptors get a shot at winning their first NBA championship right at home.

Kawhi Leonard fueled a huge third-quarter run as the Raptors demolished the Golden State Warriors, 105-92, to take a commanding 3-1 lead in the NBA Finals in Oakland on Friday, June 7 (Saturday, June 8, Philippine time).

The Raptors moved within a win of claiming their first league championship with Leonard unleashing 17 of his 36 points in the 3rd quarter and grabbing 12 rebounds in Game 4, where the Raptors flipped the switch in the 2nd half.

“Just (got to) be patient, come in focused and ready to play defense and make some shots,” Leonard said. “As long as we win, I’m satisfied.”

Only once in 34 chances in NBA Finals history has a team rallied from 3-1 down to win the title, that being in 2016 when LeBron James led Cleveland back to defeat the Warriors.

Serge Ibaka dropped 20 points and Pascal Siakam scored 19 for the Raptors, who can wrap up the series in Toronto in Game 5 on Monday, June 10 (Tuesday, June 11, Philippine time) after drubbing the defending champions for two straight games at the Oracle Arena.

The Warriors welcomed back guard Klay Thompson, averaging 19.5 points a game, who missed Game 3 with a left hamstring strain, and reserve forward Kevon Looney, who had been declared done for the series due to a chest injury.

But the Warriors remained without playoff scoring leader Kevin Durant, out the past month with a right calf injury, and lacking him they were no match for the fast-moving Raptors.

Leonard opened the second half with back-to-back three-pointers, giving the Raptors their first lead at 48-46.

Toronto closed the 3rd quarter with a 20-6 run to seize a 79-67 lead entering the 4th quarter, Leonard scoring 11 and Ibaka adding 7 in the pivotal span.

Fred VanVleet opened the 4th quarter with a three-pointer for Toronto but was taken to the locker room moments later for 7 stitches after a bloody gash was opened under his right eye when he was struck by the left elbow of Golden State’s Shaun Livingston under the basket.

The Warriors got within 97-89 on a Steph Curry three-pointer with 2:56 remaining but came no closer.

Curry finished with 27 points and 6 assists while Draymond Green flirted with a triple-double for 10 points, 9 boards and 12 assists.

It could have been the final game at the 53-year-old Oracle Arena for the Warriors, who will move into a new arena next season in San Francisco. The arena has been the club’s home since 1971.

Leonard scored 14 points in the 1st quarter but the rest of the Raptors shot 1-for-13 and the Warriors, led by 6 points from Looney, jumped ahead 23-12 before Leonard scored 5 points in a 7-0 Toronto run.

Thompson caught fire in the 2nd quarter, going 4-of-5 from the floor as Golden State led 46-42 at halftime. – With a report from Agence France-Presse