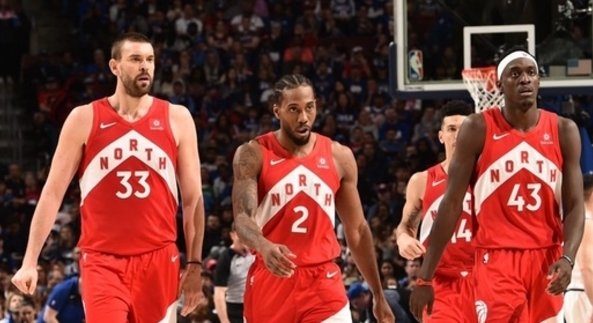 MANILA, Philippines – There’s an old saying that goes: “It ain’t over ‘till the fat lady sings.”

Clearly, practice of that motto has found its way up north in Canada, as seen from their only NBA team, the Toronto Raptors.

After handing the two-time defending champion Golden State Warriors a 105-92 whooping in Game 4 of the NBA Finals, the first-timer Raptors already looked like they have been in this situation for years on end.

Sure enough, team veteran Kyle Lowry assured that his teammates aren’t counting their chickens before they hatch.

“We didn’t do [anything]. We haven’t done anything. We won 3 games,” Lowry said after being asked why they looked “stone-faced” as the buzzer sounded for their win.

“We understand that, they’re the defending champs, and they’re not going to go out easy,” he continued.

Lowry only finished with 10 points in the win, but still left his mark all over the statsheet with 7 assists, 3 steals and 2 rebounds. He didn’t even need to do more than that, as the Raptors frontcourt took care of business on the road.

If Toronto indeed wins it all, Kawhi Leonard all but cemented his claim on a second Finals MVP after a 36-point, 12-rebound double-double with 5 three-pointers, 4 steals and no turnovers to boot. (READ: Cool-as-ice Kawhi sinks ‘big-boy shots’ as Raptors near title dream)

Defensive specialist Serge Ibaka, meanwhile, cranked up his offense to the tune of 20 markers, 4 boards and 2 blocks off the bench while Pascal Siakam bounced back with 19 points and 5 rebounds.

Lowry credits the team’s levelheadedness to the arrival of Leonard, who is famous for being unflappably serious and borderline emotionless on and off the court.

“I think I’ve said it in many ways, and I think he’s really been – his demeanor has kind of taken a big part of our team,” he said. “And we have some guys that are fiery and feisty, but we all kind of just stay levelheaded and never get too up, never get too down.”

Leonard didn’t even want to think what bringing a title means for the country of Canada.

“I’m really not sure. I guess you really would have to ask somebody on the street or one of our fans,” said the former champion.

“I’m pretty sure it’s a long time waiting. They’re going to be excited. I mean, they’re already excited just as us just being here for the first time. They’re going crazy after the Eastern Conference Finals and – I don’t know, there’s no telling.”

Despite being in uncharted territory, the Raptors are clearly all ready to take the franchise to bigger heights once it’s all said and done. They now have a chance to win their very first NBA title on Monday, June 10 (Tuesday, June 11, Philippine time), right on their home floor. – Rappler.com