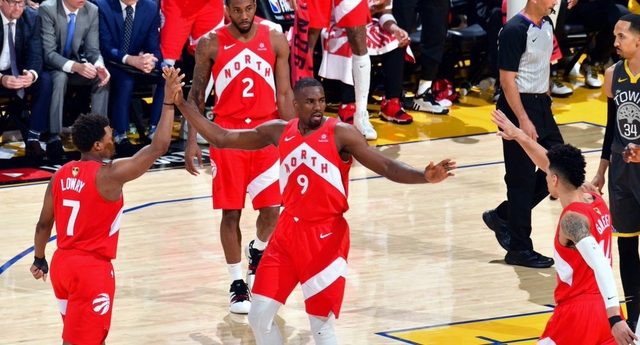 TORONTO, Canada – With an uncanny calm, the Toronto Raptors have advanced within one victory of a historic NBA title, bringing joyful delight to supporters even as they maintain a stoic manner.

Winning twice on the road to seize a 3-1 edge over defending champion Golden State in the NBA Finals brought only stone-faced looks from players, taking the cliche of getting neither too high or too low to epic levels.

“The focus part has been impressive [and] necessary,” Raptors coach Nick Nurse said. “They know we can’t get some place before it gets here. You got to put in the work to do it. There’s still a lot of work to do.”

A dramatic victory to reach the brink of the NBA crown they have chased since last October produced all the enthusiasm of a corporate report at a business meeting from the Raptors.

“We’re focused. We know that it doesn’t mean anything until someone has 4 wins,” Raptors star Kawhi Leonard said.

“You never know what could happen and you got to take advantage of it and don’t get overly hyped and excited.”

“Just stay in the same routine and just focus on what’s in front of me. Human beings, we do think in the future. You just got to stay current, stay in your routine, be patient and not rush anything.”

Leonard, who missed most of last season with an injury, has made his mellow monotone a trademark. Kyle Lowry, Marc Gasol and Danny Green have helped pass it to teammates.

“Kawhi certainly sets that tone, but so does Kyle, Marc, Danny. The younger guys take the cue from them. They just know there’s not a whole lot of energy to spend on celebrating before time,” Nurse said.

“Our collective IQ, our experience and our demeanour has been good. They have gone in after games and talked about continuing to work and improve. There’s still a lot of room for improvement.”

Staying in the moment

For Lowry, there’s a sense of gratitude that sustains his composed manner.

“I’m here playing basketball for a living. Life’s pretty good,” he said. “Every day isn’t given to you. You should be happy you wake up every day. I’m great. I’m alive.

“That’s the staying-in-the-moment thing I’ve always lived by. So it wasn’t hard to do. We just kind of made that the forefront of our team.”

“We just have a bunch of guys that are in the moment, understanding we’re just going to keep playing and keep working.”

Leonard was inspired by being forced to sit out with an injury.

“You never know when those times will come when you’re not going to be able to play,” he said. “That’s what my mindset really comes from and what made me grow as a player. Those are the worst times in basketball.”

“It’s not losing games or missing shots. It’s about you being able to play. I grew up my whole life wanting to play in the NBA. And when that’s taken away, it’s terrible.”

For Lowry, it’s appreciating that real adversity isn’t found playing basketball for millions of dollars no matter what the final score.

“What my mom had to go through and my grandmom, feeding myself, my brother and my other little cousins, going to work, getting up at 5 in the morning, making me cereal and being able to provide for me and my brother and my family, that’s pressure,” Lowry said.

“Just being willing to do whatever it takes to make sure that your kid will see better than what you’ve ever seen, getting up and taking public transportation an hour and a half away – people like that are heroes to me, just going to work, grinding and doing whatever it takes to provide for your family and protect who you have to protect.”

Lowry admits the team does draw energy from the emotional support the Raptors get from screaming supporters watching outside in “Jurassic Park.”

“We want them to be excited,” he said. “But we’ve still got work to do. We haven’t done anything. We’ve still got to get one more win.” – Rappler.com