Facebook Twitter Copy URL
Copied
'It's going to be a journey but I'm built for this,' says Kevin Durant as he faces a year of rehabilitation

Durant, averaging 34.2 points a game in the playoffs, suffered the injury in Monday’s fifth game of the NBA Finals, which the Warriors won 106-105 to pull within 3-2 of Toronto in the best-of-seven championship series.

It was Durant’s first game back after missing a month with a right calf strain, the 2017 and 2018 NBA Most Valuable Player having been absent for 9 playoffs games in the span.

“What’s good everybody I wanted to update you all: I did rupture my Achilles. Surgery was today and it was a success, EASY MONEY,” Durant posted.

“My road back starts now! I got my family and my loved ones by my side and we truly appreciate all the messages and support people have sent our way.”

The news, which likely means Durant misses the entire 2019-20 season with rehabilitation, came just minutes after Golden State finished a workout on the eve of hosting Game 6 of the NBA Finals.

The Warriors hope to win to force a seventh game Sunday in Toronto as they seek a third consecutive NBA title and fourth in 5 seasons.

“Like I said Monday, I’m hurting deeply, but I’m OK,” Durant posted. “Basketball is my biggest love and I wanted to be out there that night because that’s what I do. I wanted to help my teammates on our quest for the three peat.

“I know my brothers can get this Game 6, and I will be cheering with Dub Nation while they do it.” 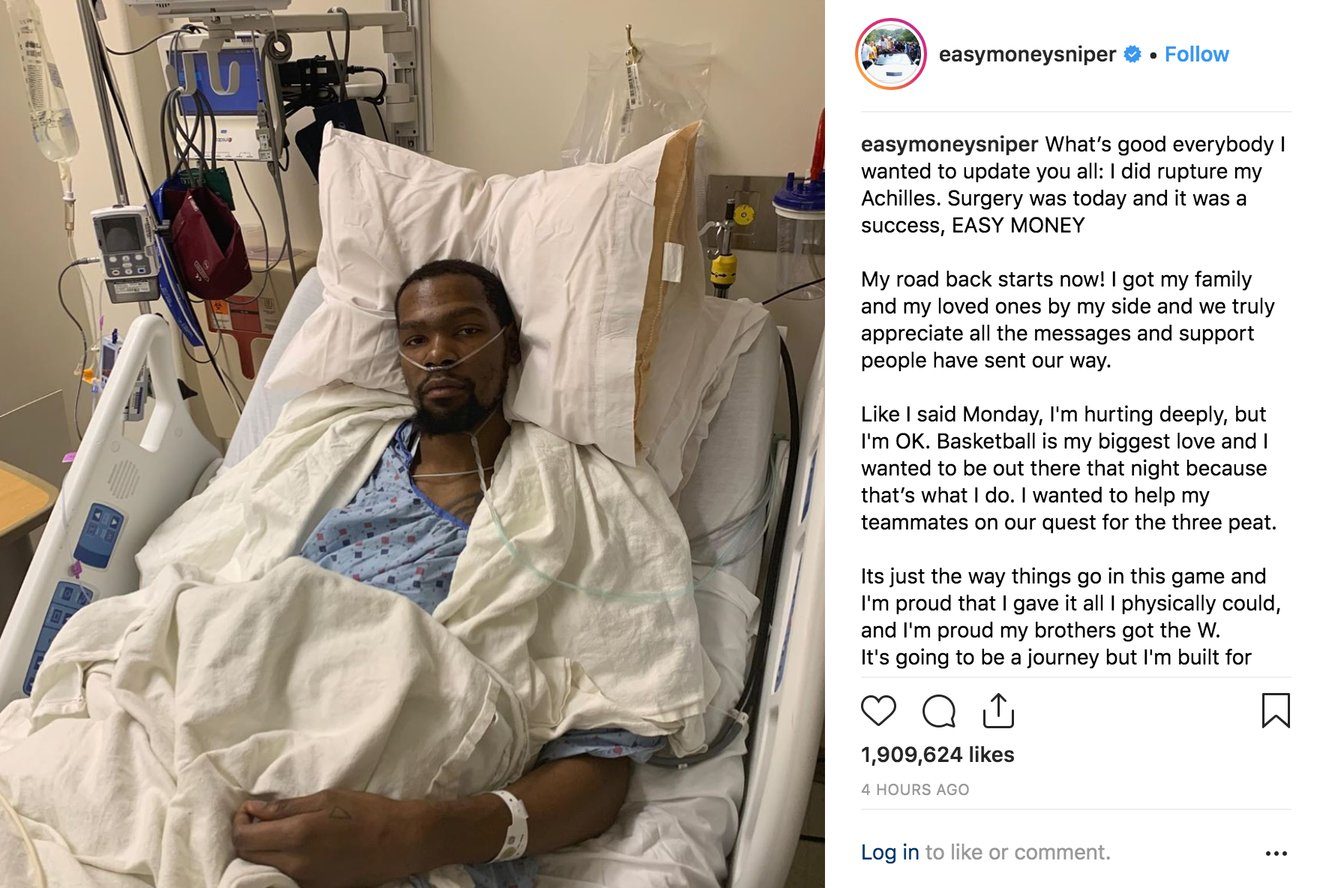 Durant can opt out of his contract and become a free agent, a prospect some teams have waited for years to pursue, with the Los Angeles Lakers, New York Knicks, Brooklyn Nets and Los Angeles Clippers often mentioned as prospective new teams for the 30-year-old superstar.

But now Durant faces a year of rehabilitation and likely another campaign to play his way back into the formidable peak shape that enabled the Warriors to dominate Cleveland in the prior two NBA Finals.

Warriors guard Klay Thompson defended Durant against critics who doubted his desire to return for the Warriors and put him among icon sports stars.

“That’s just the nature of the game these days. It happens to the greatest athletes to ever play,” Thompson said. “Every athlete at his level has gone through it, whether it has been Kevin, Muhammad Ali, LeBron James, Michael Jordan, baseball players, Wayne Gretzky. They have all been questioned.

“But we know who he is. We’ve won championships with him. I’ve seen him every day in the gym. You don’t need to question someone’s heart or desire to play when you see their daily work and their resume.”

Warriors guard Stephen Curry took issue with those seeking someone to blame for Durant’s injury, which came after team and personal doctors approved the return and agreed the worst possible outcome would be another calf strain.

“Everybody feels horrible for what happened,” Kerr said.

“Would we go back and do it over again? Damn right. But that’s easy to say after the results. When we gathered all the information, our feeling was the worst thing that could happen would be a re-injure of the calf.”